Students are eating more of their (healthy) lunch

New school lunch policies improved food consumption and minimized waste in one school district; can we do even better? 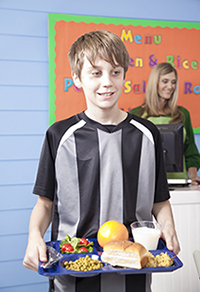 When the Healthy, Hunger-Free Kids Act of 2010 was passed and required the USDA to update the nutrition standards of the National School Lunch Program, some people feared that more food waste would occur.

We've seen it happen before. When some schools pulled chocolate milk from their menus, a Cornell University study showed that milk consumption dropped 10 percent, milk waste rose 29 percent, and participation in the school lunch program fell by 7 percent.

Interestingly though, it seems the new nutritional standards may actually be reducing food waste. Data was collected in an urban, low-income school district in 2012 before the new policy was put in place and then again in 2013 and 2014 after the changes were in effect. Each component of the meal - entrée, fruit, vegetable and milk - was weighed before and after lunch.

On the other hand, the proportion of students who chose vegetables dropped from 68 to 52 percent. The good news, though, is that students selecting vegetables ate 20 percent more of them, receiving more healthful nutrients and reducing food waste further.

One factor that remained steady through the three years was milk intake. The school did not offer flavored milk during meals, only 1 or 2 percent white milk, and students drank about half of their milk consistently during the study.

To boost fruit intake, the school district offered larger servings and a greater variety of fruits to choose from. If the same was done for milk, would consumption have risen? It certainly could have. The addition of low-fat, flavored milk may have been just the ticket to further enhance the intake of valuable nutrients while keeping quality food products out of the trash. And that would be a win-win for students, parents, schools and dairy producers alike.

They’re finding the best in this
HD Notebook
Related to:
HDN, consumers, milk
In HD Notebook

Bring consumers to your farm in a virtual way
By Abby Bauer, Associate Editor