Price picture for 2016 is disappointing

Futures prices this far out already point to belt-tightening in the first half of 2016.

By Dennis Halladay, Western Editor
Plenty of change could still happen in the next few months – both good and bad – but right now the milk price picture for the first half of 2016 is not good.

After startlingly high prices in 2014, dairy producers knew 2015 had only one direction to go. They expected much lower prices, perhaps not much above break-even, and they've been right so far.

Profits and prepays have generally eased the pain of getting through 2015, but as the year now heads into its final months what should producers prepare for in the next one?

I hate to say it, but more belt-tightening looks likely.

Until we get to November, futures prices at the Chicago Mercantile Exchange for 2016 won't have much more significance for me than anyone else's guess.

But in watching how they've flopped around all summer across a pretty narrow range, it has become very clear that people who make a living in the trading pit expect Class III milk prices for the first half of 2016 to be worse than they have been all of this year.

Not horrible and not catastrophic, but not good and not at all. Worse as in roughly 60 cents per hundredweight less than the $16.04 producers have averaged so far in 2015. 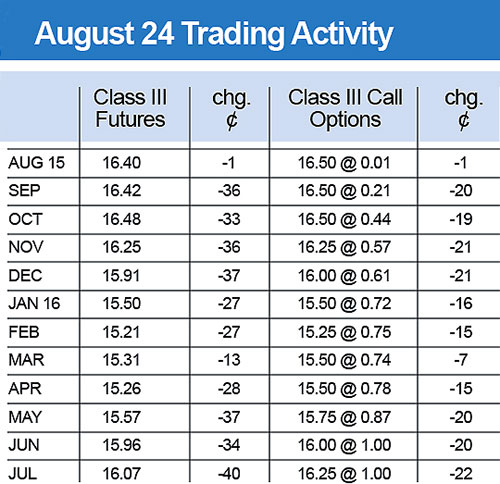 Sixty cents doesn't sound like a lot, but I suspect it will be the difference between meager profit and unpleasant loss for many producers.

The "big picture" message here has almost nothing to do with production costs (low) and almost everything to do with global dairy product supplies (huge) that producers can't do anything about.

That said, there is also enormous dairy industry instability in Europe and New Zealand that could change this situation.

Farm pay prices in both areas are well below the cost of production and are creating a financial bloodbath for farmers. The number of cattle being sent to slaughter is surging, producers are going out of business, and declines in milk production are inevitable.

Even so, there is a lot of milk in the global marketplace that probably won't go away very quickly, so weak Class III prices in the U.S. may not either.

Robots: What was I thinking?
By Dennis Halladay, Western Editor