Winners and losers in a California FMMO

Producer revenue is projected to rise $1 billion per year in the far West, but fall $230 million everywhere else. Proceedings continue each day in Clovis, Calif., to consider establishing a Federal Milk Marketing Order in California.
Today concludes the fourth week of the public hearing being conducted by the U.S. Department of Agriculture in Clovis, Calif., to gather input on four proposals that have been submitted for a Federal Milk Marketing Order (FMMO) in California.

It is so far proving to be the long and tedious process that many expected, and has so far seen minimal input from dairy producers themselves. Daily proceedings from the hearing can be heard via internet webcast at http://www.ams.usda.gov/live

The sheer magnitude of a potential California FMMO – the state produces one-fifth of all milk in the U.S. – has attracted nationwide attention because it would likely have financial ripple effects on producers across the country.

California dairy owners would be the biggest winners, especially under the proposal submitted by the state's three largest dairy cooperatives, according to USDA's 46-page regulatory impact analysis of the economic effects resulting from all four proposals. The report can be downloaded for free at http://www.ams.usda.gov/sites/default/files/media/Preliminary%20Impact%20Analysis%20-%20Final.pdf

Meanwhile, producers everywhere else in the U.S. would see a combined average of $230 million less total revenue per year. Below is a breakdown, per USDA's analysis, of average annual changes in each FMMO that would occur under the co-ops' proposal: 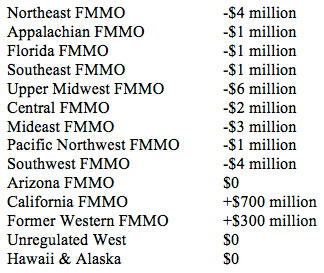