Our actions need to speak louder than words when working with livestock.

By Abby Bauer, Associate Editor
Cows may not speak like we do, but that does not mean that we cannot communicate with them. We must simply interact in ways they understand.

"Cattle prefer to communicate through sight," said Ron Gill from Texas A&M AgriLife Extension during his presentation at the Wisconsin Dairy and Beef Well-Being Conference held in Platteville, Wis. His demonstration involved beef animals, but his advice pertained to cattle of any breed.

He explained that to accomplish good stockmanship and low-stress handling, we must understand how prey animals like cows see the world. Gill shared that while cattle have excellent peripheral vision, they have a large blind spot directly behind them and a smaller blind spot in front.

According to Gill, sound should be the secondary means of communication, although many people use it first. Noise, and in particular the human voice, can be distracting and stressful, he said. He noted that cattle handling does not have to be completely silent. "Noise can be very effective, if used sparingly," he said.

Gill described touch as the third means of communicating with animals, but this should only be used in situations where animals are confined and additional stimulus is needed to initiate response or movement. Effective touch does not include the use of sorting sticks, paddles or hot shots.

Cattle want to see you. It is important to stay in an animal's line of sight. 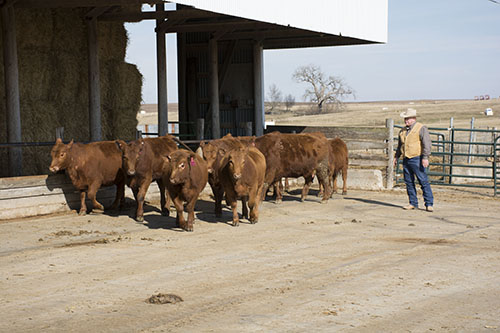 Cattle want to be with and will go to other cattle. Cattle have a natural herding instinct. Handlers can take advantage of this by working the cattle in front first. In this case, those in the back are likely to follow.

Cattle want to remove pressure. It is a natural instinct to return to the last known place of safety or comfort. Handlers can use this response to their advantage.

Cattle can only process one main thought at a time. If cattle are thinking about anything other than what you want them to do, change their focus first before applying pressure.

Sound stockmanship involves convincing an animal that the intended movement is their idea. In that way, force is avoided and stress is reduced, Gill noted.

A different kind of graduation
By Abby Bauer, Associate Editor