Do your homework to prevent barn collapses in snowy weather

By Hoard's Dairyman staff   @hoardsdairyman
In recent weeks, we've sadly heard of several barn collapses in the upper Midwest. Each of the barns that failed was bearing an extreme snow load due to an overly white Christmas we had in this part of the country. Now, the eastern U.S. is being pummeled with snowstorms. For those with free stall barns especially, heavy snow can be a concern. 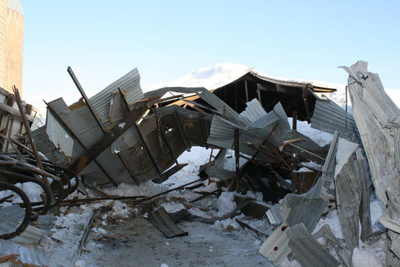 We visited with Dave Kammel, an agricultural engineer with the University of Wisconsin about his take on recent barn collapses. Kammel advocates that prevention is the first way to prevent this type of devastation. Kammel says, "We really haven't had an unusual amount of snow; we've had this much snow before. Some of these buildings just have not been engineered to carry this much snow." He adds that farms should consider a higher upfront cost of engineering to prevent repair costs down the road.

Still, Kammell recognizes that some older barns, over time, may be at risk for snow collapse. He recommends hiring an engineer to visit your farm to evaluate your options. Additional bracing can be added to barns, and snow removal may be an option. Roof snow removal is a seriously dangerous task. Kammel says that if you do need to go on the roof, be sure to wear a harness that is tied to a stable point in the event of a fall. If removal using mechanical methods (using a boom, cherry picker, or similar) is an option, this will be safer, Kammel says. Also, be sure to remove snow uniformly and in narrow strips.

So why doesn't Wal-Mart or the local grocery store collapse with all that snow? Building codes. Commercial building codes require that roofs must have a minimum snow load rating of 60 pounds per square foot. Many homes in the upper Midwest must be between 30 and 40, at the least. Agricultural buildings have no code, though. Kammel says this allows anyone to buy a building kit from a local building store and have anyone put it up, without taking engineering into consideration.

Are you familiar with how much snow your roof is prepared to hold?
Related

For 58 years, she read every word in Hoard’s Dairyman
HD Notebook
Related to:
HDN, winter, weather, safety
In HD Notebook

Life is all about perspective
By Hoard's Dairyman staff