It’s the journey that should be remembered.

My dad came from a large Midwest family where they milked 25 cows, raised some sheep, had a few chickens, and worked cropland. He was one of seven hard-working farm boys with four sisters. All were members of 4-H and looked forward to the fair each year.

Each child had his/her own animal. With such a small herd and lots of siblings, the option to own multiple animals was not viable. So, when Dad exhibited at the Wisconsin State Fair, he got to take one animal – his animal. And, at the time, the show was so large that there were quotas set on cattle numbers, so just being able to show was huge.

In my 4-H days, I wanted to take a few more than I needed to the fair, and Dad would remind me that he only got to take one. “Fair time is fun time!” he would always remind me. He wanted to ensure that I enjoyed the experience and not be totally exhausted from all the preparation. After all, he was staying home all week on the dairy, and I would be at the fair doing the work. 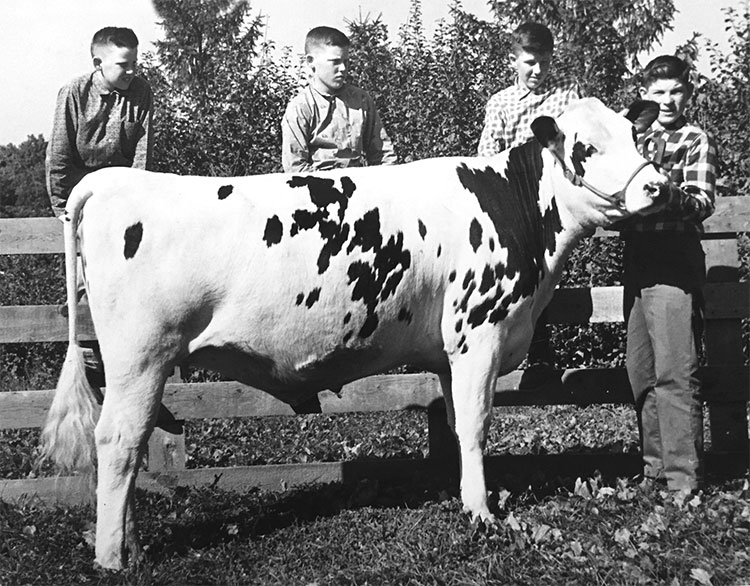 There were only a few photographs of my dad and his family growing up that I saw as a child. But there was one that seemed to be special. It was an 8 x 10 and it was the very first image in the “Wisconsin Family” album. It was a photo of my dad on the halter of a yearling heifer and three boys sitting on a fence behind them. I knew they were his brothers (they all look alike and are close in age), so I could name them but not identify them. I heard the name of the heifer a few times but it did not stick in my memory.

One spring, my brother’s registered Holstein had injured itself and was not able to stand. The family made the choice to remove her ovaries in the hope of producing offspring from the cow, as she had only produced bulls. So, after a weekend home from college, I drove the thermos with two ovaries in a specialized saline solution three hours to the laboratory in south central California for the procedure.

I asked a lot of questions of the embryo technician, as this was an area of particular interest of mine. The veterinarian then walked in the room, and I introduced myself with first and last name. He asked if I was “Andy’s daughter.”

There was no other small chat, no “how are you this evening?” or “what brings you here?”

“Does he have any offspring of that specked heifer, Pearl, I think her name was?” he asked.

“Your dad won first place at the Wisconsin State Fair with that heifer. And I was second!” he recalled.

Aha! The heifer in the photo album was a “First Blue” at the state fair — a big deal to anyone who has ever attended the annual Wisconsin event. And placing second to Pearl 30 years later and 2,000 miles from West Allis was as fresh in his mind as if it had happened yesterday. It appeared placing second was more significant (or traumatic it seemed) than my dad winning the class.

That is when I knew that event was meaningful — because there was a family photo to document it. The story of winning was never part of my dad’s lore, his brothers (not the award) are in the photo, and the ribbon was not saved for posterity. There were never stories of “My First Blue” growing up. I would not have known the significance of his win if I had not met the veterinarian. I recently discovered that there were 97 heifers in that class, all born within 60 days of each other. I guess winning the class was quite an accomplishment!

The time my dad and his brothers spent together in their young teenage years would be the only time they would be together. Hanging out in the fair barns and each caring for just one heifer was probably a lot easier than the work at home those summers. I bet they had a really good time!

In adulthood they all went to college, worked off-farm during summers, and later lived in four different states. There are few opportunities for reminiscing these days, as two in the photo are no longer alive. But the stories, both in and out of the image, endure.

Capture some special images this summer and see what you recall about the event 30 years later. Was it the prize or the people?