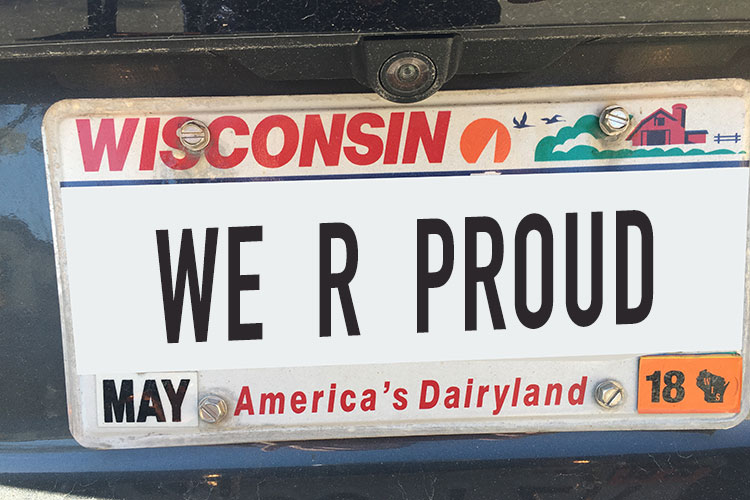 I’m not from Wisconsin. I’ve only been to Wisconsin like three times, but to be honest, I’m a little jealous. As a dairy farmer who’s not from Wisconsin, sometimes I get funny looks. I’ve literally had people say the following sentence to me, “Aren’t all dairy farms in Wisconsin?”

Ugh! My unfounded and ridiculous emotions aside, I’ve never harbored ill feelings toward Wisconsin or its license plate tagline, America’s Dairyland. I’m actually pretty annoyed that there are individuals who think it should be changed.

Even though it has caused a good deal of commotion in the media, and the Wisconsin State Journal said that Wisconsin Manufacturers and Commerce President Kurt Bauer, who made the initial suggestion, later clarified in an email that his organization would not lobby lawmakers for this change, and that it was merely meant to be a conversation starter.

The suggestion however raises an important point. At least some people in the state think the tag no longer describes modern day Wisconsin. In an NPR article, a marketing consultant went so far as to say that the words ‘America’s Dairyland’ isn’t ‘attractive’ enough. No, the exact quote was, “because cow farmers just aren’t – no offense – just aren’t all that attractive.” Yikes.

If you assume that people will move to a place based on the attractiveness of the people, no one would live anywhere near a Walmart. Have you seen the People of Walmart website?! Jokes aside, I’m no marketing expert, but I can almost picture the commercial in my head. A herd of cows in a pasture, a kid feeding a newborn calf, the green picturesque hills and flowing fields and croplands of Wisconsin’s Dairyland. Not every American wants to live in a city, and the campaign could practically write itself. Here’s the kicker, Wisconsin has modern cities, too! I think that any decent marketing executive, or maybe just a few millennials with Twitter and Snapchat accounts, could positively promote their state and entice new visitors.

Finally, really?!?! Just, really!?! In my opinion, calling an entire group of people unattractive is grasping at straws. I’m sure he meant our lifestyle more than the individuals, but that’s not what was said. Considering how few people know a dairy farmer, maybe it’s time to roll out our fireman style ‘America’s Dairy Farmers’ calendars.

Look, this Pennsylvania dairy farmer may always be a little envious of the state nicknamed America’s Dairyland. It would be awesome to live in a place where dairying was celebrated not just tolerated.

But until that day, and to be clear I mean the day that dairy farming is celebrated everywhere, fight on Wisconsin! For clarity’s sake, and the right to still be able to talk to my own family, this statement has nothing to do with Wisconsin’s sports teams. WE ARE PENN STATE!

Back to the basics
By Jessica Peters, Pennsylvania dairy farmer