Give your three-quartered cows a chance to thrive in your herd. 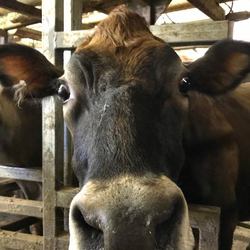 We all have them. We’ve had to make the tough decisions. We’ve had to live with the consequences. We’ve agonized over whether to keep them or sell them. Even with our best efforts, every dairy herd ever has had a three-quartered cow. No matter how hard you try to prevent it, eventually it happens. For me, these cows fall into three main categories: identified, infected, and injured.

Identified: She calved in with a blind quarter. If I had to choose one, this is the best kind of three-quartered cow to have simply because it’s done. Boom. There’s nothing to milk, nothing to treat, and nothing to doctor. It will probably never milk again, but it will also most likely never bother her again.

Infected: She got mastitis that you couldn’t cure. You tried everything, like truly everything. In my experiences, this is the type of three-quartered cow most likely to become four-quartered again. Though, it’s still not all that likely.

Injured: These are the worst! She tramped her own teat, or a different cow did it for her, either way there’s been physical damage done. The problem is that these eventually swell to a point where the milker physically can’t milk them. Then, they get mastitis and kick you for a month before you inevitably come to the decision that you can’t win this battle. Then she becomes an infected, soon-to-be three-quartered cow.

No matter what kind of three-quartered cow you’re dealing with, the real problem is what comes next. What do you do with her? In two of these scenarios (infected and injured), she’s probably going to get sick. Knowing that there’s not much you can do about the real problem, you could spend lots of money and time providing supportive care. The alternative is selling her before it gets that bad. In an ideal world, every infected or injured three-quartered cow is close to going dry and you can just dry her off early giving her the chance to naturally fight the infection!

For example, meet Olive. Olive is a polled 4-year-old who has been three-quartered for all three lactations thanks to a particularly nasty case of mastitis. She’s had three heifer calves, two of which are also polled, and is currently averaging 85 pounds a day. If you can look her in the eye and tell her that she’s not a productive member of our herd that’s okay, I’ll keep her.

Back to the basics
HD Notebook
Related to:
HDN, animal care
In HD Notebook