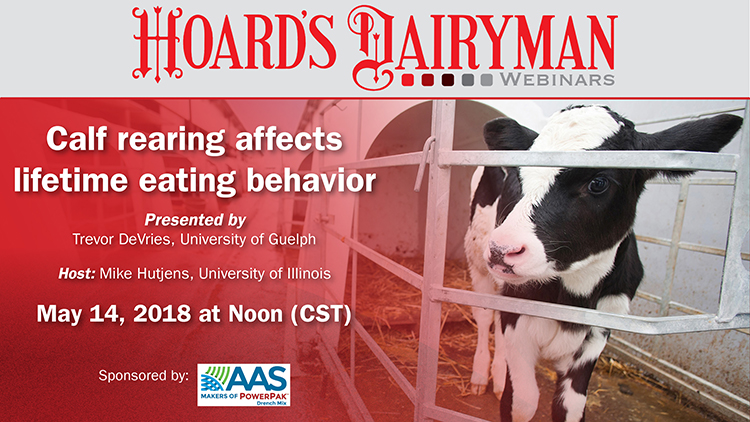 It’s not just what we feed calves when they are young, but also how they are fed that will set the stage for their long-term eating behavior. This was the message during the May Hoard’s Dairyman webinar when Trevor DeVries, University of Guelph, shared research findings in his presentation “Calf rearing affects lifetime eating behavior.”

Calves are impressionable, and feeding patterns developed early in life remain with them through adulthood. This includes things like number of meals consumed daily and the time spent eating, which together determine dry matter intake – the driver of milk production in cows.

To start calves on good footing, DeVries suggests three to four weeks on a milk-only diet, with very little solid feed intake, like hay or grain.

The reason for this? Calves need more milk than they did 20 years ago. They are able to consume larger volumes in today’s management systems. Higher growth rates are seen with this newer ideology that reduces stress in calves. This includes better immunity, greater feed conversion, earlier age at first breeding, and more efficient average daily weight gains. The elevated lactation performance as cows (over 3,000 pounds of milk in the first lactation) is significant.

Calves that are fed free choice eat more meals a day. This is logical – if feed is available, they will eat it. However, they seem to consume solid feed shortly after being fed milk. Calves fed high levels of milk with solid feed had advantages. They ate at a slower rate, consumed smaller meals, and had longer pauses between meals. Under these circumstances calves were less anxious during feed delivery.

Starter is still needed, just not as early as some would have thought. A high-quality starter should be 20 to 22 percent protein. The rumen not only needs to change physically, but metabolically as well. The addition of forage and fiber helps the rumen muscle and wall develop. But, forage fed too early in life displaces the concentrate feed needed. DeVries suggested introducing hay at 5 weeks of age.

The amount, type, and length of forage fed must be considered when adding it to these young animals’ diets. Alfalfa or good grass hay is what calves will like, but keep it to just 5 percent of total ration dry matter intake (DMI). He suggested the forage be about 1 inch in length. Chopped hay can also be mixed with the starter. This seems to minimize sorting habits.

Once a calf is weaned, it is more difficult to determine what is being consumed on an individual basis. DeVries suggests having calves eat with a friend, or in other words be housed with one other animal prior to larger pen movements. He warned against initial pairing during weaning as calves may have a desire to suck on each other during this transition period.

Research has shown that the paired calves eat more solid feed during the weaning time frame and higher growth rates are seen over the weaning period. They also eat more frequently when a buddy is present.

Once in larger groups, calves typically want to eat at the same time. But, pecking orders can be developed and free choice eating may be restricted by aggressive penmates. This may cause some less aggressive calves to eat their meal very quickly and then retreat from the manger or wait until there is less competition in the eating area. Unfortunately, eating later may not provide them enough dry matter after others have ravaged the manger earlier. This has an immediate and long-term impact on their eating habits.

DeVries summarized his webinar with these reminders:

• Ensure that calves get a sufficient milk supply

• Feed a quality starter and consider a physically effective forage

There were numerous charts displaying the growth advantages of different management options in the presentation. Take the time to watch the webinar and review the research data DeVries presented. The archived presentation is found here and was sponsored by AAS. 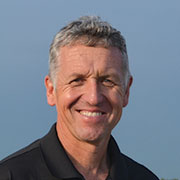 Karl Burgi, Dairyland Hoof Care Institute, will present “Supervise hoof health with a ‘No lameness tolerance policy.’” It will be presented on Monday, June 11, at noon (Central time).

The webinar is sponsored by Zinpro Performance Minerals.