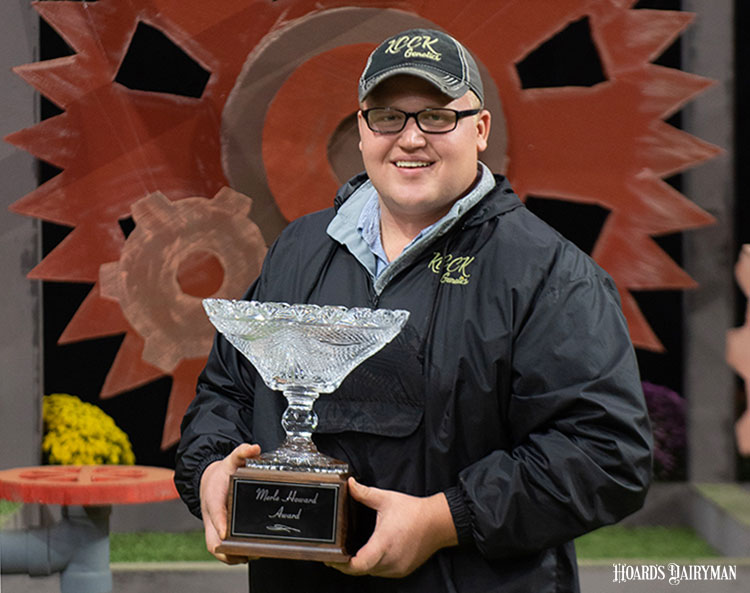 Personable, hard-working, and above all, a team player who routinely deflects credit for success to others. These are among the many words that can describe Kaleb Kruse who possesses a beaming personality.

This graduate of Kaskaskia College in Centralia, Ill., has a deep appreciation for great cattle from all dairy breeds. With that in mind, Kaleb Kruse established the KCCK prefix with his two younger brothers, Cole and Carter, where the trio breeds their own cattle and also purchases foundation seedstock to improve their growing herd.

In high school, Kruse was very involved in the Maquoketa FFA Chapter holding offices both in his chapter and at the district level. 4-H involvement included serving as a club officer, on County Council, and exhibiting dairy and swine at the county and state levels. He was a member of the state 4-H Dairy Judging and Quiz Bowl teams.

Always willing to lend a helping hand, Kruse has provided labor and has been a leadsman at Iowa Holstein Association’s state sales. He has exhibited Holsteins at the county, district, state, and national levels. KCCK McBeth was the first homebred animal exhibited by the Iowa native. The heifer was junior champion at Iowa State Fair, 3rd bred and owned, and 7th at the 2015 International Junior Holstein Show held at World Dairy Expo.

While at Kaskaskia College, the 16th Merle Howard award winner was a member of the dairy cattle judging team and placed second in reasons at the 2017 Post-Secondary Contest at World Dairy Expo. Kaleb’s University of Minnesota judging team place third overall this past Monday at the 2019 Intercollegiate Dairy Cattle Judging Contest.

In his downtime, this student, who transferred to the University of Minnesota to complete his four-year degree, travels to sales, meeting people across the globe while working for Cowbuyer.com

Respected among his peers, past Merle Howard award winner, Cassy Krull, had this to say about Kruse, “He is a team player! You will never hear Kaleb take the credit himself. He is always part of the team.”

“Whether it is working at home or the show, Kaleb is the worker bee!” continued Cassy. “He gives back by helping with local dairy judging groups and helping youth at shows by taking them under his wing!”

Kruse is the son of Sara and Tom Kruse.