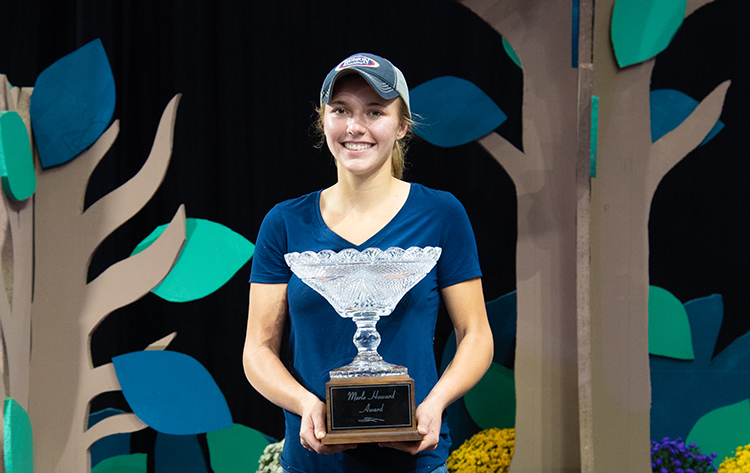 A hard-working, dedicated, and passionate showman, this year’s Merle Howard Award honoree started her showing career by exhibiting grade cattle from a nearby neighbor.

From that humble beginning, Nickels began pursuing her dreams of building a dairy herd when she purchased her first registered Holstein . . . a spring calf. Following a mating to the Holstein sire named Atwood, her very first bred and owned calf was born a few years later. That first bred and owned animal eventually earned first-place honors at her district Holstein show and later a top ten finish at the State Holstein show.

From that launchpad, this University of Wisconsin-Madison student developed her herd to the point of winning Grand Champion Jersey of the Junior Show at the 54th World Dairy Expo.

There’s a reason for all the success this junior has earned . . . Nickels is one of the hardest working youths in the barns. Whether it’s helping catch manure, feeding hay, or being the one stuck clipping legs, no job is too big or too small for this young lady. To further develop her skills, Nickels began working for some of the very best in the area, including Cresentmead, Crestbrooke, the Sells Family, the Great Northern, and Budjon Farms. Those experiences also allowed her to hone her skills working at shows across the country.

The more this Dodge County junior learned about dairy cattle, the more she wanted to give back to fellow juniors. With an unquenchable desire to learn, Nickels teaches others by mentoring young youth via fitting and showing clinics held at their family farm. In recent years, she also has served as herdsperson for her county at the Wisconsin State Fair and prepped nearly all the county’s cattle for the show.

It's at that Wisconsin State Fair that not once, but twice, she was named Supreme Champion Showman of the entire show in 2019 and 2021. A well-rounded individual, just a few years earlier, Nickels was on the Dodge County 4-H Team that represented Wisconsin at World Dairy Expo. That team won the entire contest that year.

Nickels’ eye for good cattle also made her an ideal person to serve as committee chair for selections at the 2021 University of Wisconsin-Madison Badger Dairy Club Online Sale. As a member of the University of Wisconsin-Madison Dairy Cattle Judging Team, Kylie earned second-place individual honors at the 27th Annual Vernon County Dairy Cattle Judging Contest in September 2021.

To top off an already incredible year, Kylie Nickels was the co-owner of Homeridge T Annette, the Grand Champion Jersey of Junior Show at the 54th World Dairy Expo.

Merle Howard was a respected dairy industry pioneer. Winner of the 1954 Klussendorf Award, Howard was a herd manager, Holstein classifier, and later a sales and export businessman. Howard also served on the first National Dairy Shrine Board of Directors.

Shakira shimmies to the top
By Corey Geiger, Managing Editor

HD Notebook
For 58 years, she read every word in Hoard’s Dairyman
...
comments powered by Disqus