Wide gap between state's 4b price and federal Class III is inspiring cooperation.

By Dennis Halladay, Western Editor
Over the years, nothing has repeatedly brought out the spirit of cooperation between dairy cooperatives like low milk prices and tough times. Adversarial attitudes arrive when times are good, but working together flourishes when everyone's survival is threatened. Kumbaya.

Bad times are back in California now, which may be one reason why the state's leading co-ops, plus both producer and processor organizations, are holding hands and asking that the state's 4b (cheese and whey products) pricing formula be changed to put more money into producers' pockets.

Specifically, they're pushing in unison to close at least some of the wide divide that is typical between California's 4b price and the comparable Class III price in Federal Milk Marketing Orders. For producers in the nation's largest milk-producing state, the total gap represents about $35 million per month.

According to the California Department of Food and Agriculture (CDFA), of the 20.8 billion total pounds of milk produced in the state during the first half of 2011, 42.5 percent (8.8 billion pounds) was used to make 4b products. According to Milk Producers Council, a leading statewide producer trade organization, the gap between 4b price and federal Class III for the last nine months has averaged $2.44 per hundredweight (see table). 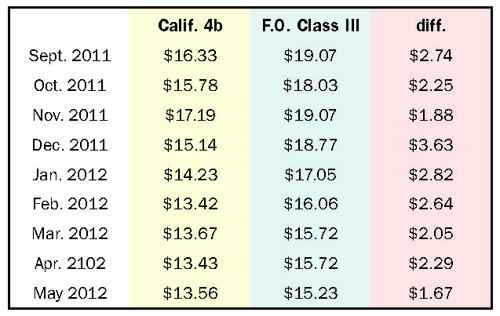 In early June, CDFA held a hearing to gather input on a proposal to amend the 4b formula, at which producer and processor groups made a compelling case that the state's current 4b price "has not been in a reasonable and sound economic relationship" with what comparable milk around the country is worth.

The Department has until mid-July to announce any changes..
Related