By Dennis Halladay, Western Editor
It is a question that has prompted industry-wide information meetings in the past and it prompted another one last week in Tulare. Interest tends to surface during awful financial times, so it's no wonder the question has come up again now. 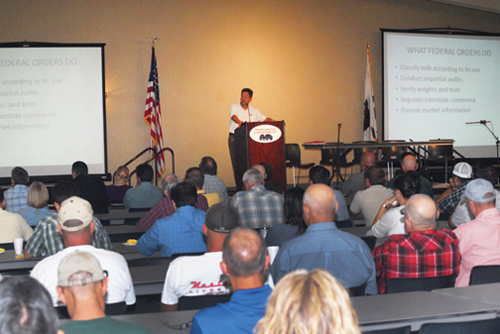 Producers who were among the 150 or so attendees at the meeting (seen here) did not get what they were hoping for – a clear dollars and cents comparison between milk prices they receive now and what they would receive in a federal order. What they got instead was an overview from a Federal Milk Marketing Order (FMMO) administrator about what federal orders do and don't do, the complex and lengthy process involved in implementing one and their unpredictable outcome.

They also got front row seats to a question and answer session between the administrator and four cooperative officials who would likely be involved in both writing a California FMMO proposal and giving testimony to USDA about it. The effect that these two very technical sessions had on most producers was not surprising: eyes glazed over, minds boggled and attention spans shut down. Producers began trickling out of the room after about 90 minutes.

The 800-pound gorilla in the room during the meeting was the question of what would happen to California pool quota if an FMMO was created. The answer: it would be eliminated. Because the current market value of all quota in the state is approximately $1 billion, any producer vote to adopt an FMMO and wipe out that asset would fall hard along quota ownership lines and probably have little chance of passing.

The last part of the meeting was a Q&A session from the audience, which generally showcased the frustration that producers feel with low milk prices, the current pricing system and the California Department of Food and Agriculture. Both the tone of the meeting and atmosphere in the room make us believe that although dire financial times are causing California milk producers to grasp for other milk pricing alternatives, an FMMO is a path they are not likely to take.
Related