By Dennis Halladay, Western Editor
Enticed by attractive beef prices and wary of scary feed costs, the downsizing of the U.S. dairy herd by milk producers is picking up speed.

Increased culling that began as a blip early in the year has accelerated dramatically in recent months, to the extent that the nation is well on track to end 2012 with fewer total dairy cows than when it began.

According to the U.S. Department of Agriculture's just-released Livestock Slaughter report, dairies showed little hesitation to get rid of marginal cows in October – despite the lure of a $21 Class III milk price and what is expected to be close to that in November.

The 285,000 dairy cows sent to plants under federal inspection in October (see table) were the most for any month so far this year. October was also the ninth consecutive month that more cows were culled versus the previous year. But it's the sudden jump in the total 2012 versus 2011 difference that is the big story. 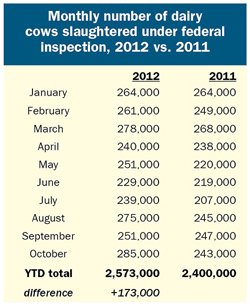 For the first 10 months of 2012, U.S. dairy producers have culled 173,000 more animals than during the same period in 2011. That's equivalent to the entire state of Indiana, which was the 14th largest dairy state last year. Of that total, 108,000 have come in the last four months alone, and October's 42,000-head difference was the biggest so far.

The sharp jump in culling has pulled down total estimated U.S. cow numbers to 55,000 head less in October than in January. That gap is unlikely to be recouped in the next two months. Average production per cow has also cooled dramatically since June and is virtually unchanged for the past five months compared to 2011 levels.
Related

I am one biased farmer
HD Notebook
Related to:
HDN, culling
In HD Notebook