It was another year of profitability struggle for milk producers. 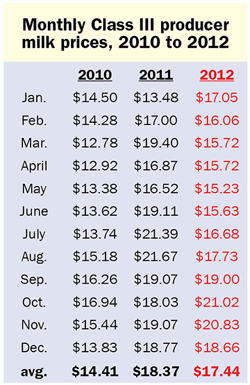 Another milk price year is in the rear view mirror, so it's time to sort through the rubble and see what it says.

First, Class III prices for the year averaged $17.44 per hundredweight. That probably doesn't feel good to anyone who had to pay dairy bills, but it actually was . . . relatively speaking.

That's because 2012 was tied with 2008 for the third highest Class III average in history. On the other hand, production costs were bad. Anyone who could make milk for just $17.44 did pretty well.

The 2012 price average came despite a truly ugly spring. From March through June, Class III prices averaged just $15.67 – a situation that spared virtually no one from red ink on the bottom line.

Things improved in summer and good prices lasted all fall. From September through December the Class III averaged a better-than-good $19.88. The October and November prices were the highest in history for those months.

Was it enough for dairy producers to recover their post-2009 financial health and rebuild their business foundation? Unquestionably not. Downsizing and streamlining will likely turn out to have been a benefit to some producers in the years ahead, but for many others 2012 may turn out to have been a temporary life support that offered false hope for the long term.
Related