Two years ago, the Upper Midwest cooperative developed a strategic plan to position the organization for future growth by focusing on core products.

By Corey Geiger, Managing Editor
Members, delegates, directors and employees of the Associated Milk Producers Cooperative met in Bloomington, Minn., for its annual meeting on March 25 and 26. During the Tuesday business session, AMPI's Ed Welch, president and CEO, reminded members that the cooperative's readjusted manufacturing portfolio with primary focus on cheese, butter and powered dairy products (whey and nonfat dry milk) has already started to pay dividends. Together those core products accounted for 85 percent of the co-ops sales in 2012. 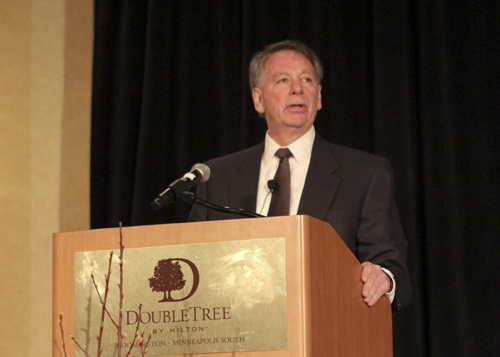 In order to get to the point, the co-op made two key strategic moves. Last March, it sold its Cass-Clay brand and that plant to Kemps. While the plant is no longer in AMPI's possession, it still maintains an exclusive supply agreement to the Fargo-based, N.D. plant. In a second move late last year, the co-op sold its cheese sauce and pudding business to Bay Valley Foods of Oak Brook, Ill. In the past, those two portions of AMPI's business represented less than five percent of the co-ops activity.

As a result, the co-op with 2,900 members not only reduced its hauling costs, but also has begun to improve its debt to equity ratio. Overall, AMPI handled 5.6 billion pounds of member milk which resulted in $1.7 billion in sales last year.

"Cheese production, which represents 57 percent of our total sales, grew by 11 million pounds compared to one year earlier," said Welch. "To help aid that growth, 40 percent of our cheese production flows through 18 new cheese vats in the Blair and Jim Falls, Wis., facilities," he said noting that installation was completed towards the end of 2011 at a total cost of $7.5 million. "Thanks to those updates, 3 million more pounds of cheese is being made from the same volume of milk. That investment will have a short two-year payback," said the AMPI leader.

The co-op continues to try to maximize producers' return on investment. Currently 46 percent of all dairy products it manufactures were in the form of consumer-packaged products with the remaining 54 percent in bulk.

Back to the basics
By Corey Geiger, Managing Editor