Can we identify acidosis tolerant cows?

Milk urea nitrogen values may have future applications in this area.

For decades, high concentrate, low forage diets were a staple on dairy farms. As economics have shifted though, there has been a push to produce higher quality forage and maximize its inclusion in the diet. Regardless of your feeding strategy, cows that sort or slug feed are likely to experience significant rumen pH changes through the course of a day. These swings, in turn, can lead to subacute ruminal acidosis (SARA), a prevalent metabolic disorder found in high producing dairy herds. 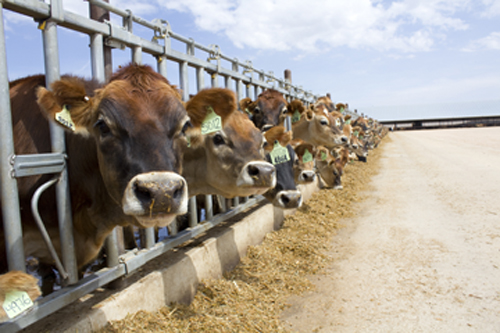 Past studies on steers and sheep indicated that considerable variation exists in the severity of SARA among animals fed a common diet. In work shared at the Western Canadian Dairy Seminar held in early March, researchers form the University of Alberta, set out to evaluate the variation in severity of SARA among lactating cows fed a high-grain diet and determine the factors characterizing acidosis tolerant and susceptible animals.

Sixteen ruminally cannulated dairy cows were fed a 35 percent forage diet. Acidosis index, or the severity of SARA (pH below 5.8) divided by dry matter intake was determined for individual animals to assess the disease severity adjusted for feed consumption.

Although all cows were fed the same diet, minimum pH values ranged from 5.16 to 6.04. The acidosis index ranged from 0.0 to 10.9 pH*minutes/ kilos of DMI. Zero indicated no acidosis.

They also observed that susceptible cows sorted against long particles whereas tolerant cows did not. Acidosis tolerant cows surprisingly had shorter total chewing time per kilogram of DMI (35.8 versus 45.1 minutes). In addition, although DMI, milk yield and milk components did not differ between the groups, milk urea nitrogen (MUN) concentration was higher for tolerant cows compared with susceptible cows (12.8 versus 8.6). This difference may have been attributed to less fermentation in the rumen of tolerant cows.

The researchers concluded that substantial variation exists in SARA severity among cows fed a high-grain diet. This lack of uniformity demonstrates the challenge in formulating a diet to optimize the productivity of the whole herd. Their work also indicated the potential to use MUN values, rather than milk fat content as an easy indictor to identify acidosis tolerant cows on farm.
Related