Despite many promotional efforts, fluid milk consumption has been on the decline since the 1940s. 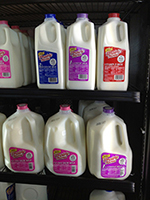 Promotion efforts like the "Got Milk?" campaign and the "Fuel Up to Play 60" program are supported by dairy checkoff dollars. Farmers contribute 15 cents per 100 pounds of milk, while fluid milk processors contribute 20 cents per 100 pounds sold in consumer-type packaging to the dairy checkoff. The Federal Government also promotes dairy consumption through the National School Lunch Program (NSLP), the Special Supplemental Nutrition Program for Women, Infants and Children (WIC), and the Special Milk Program.

On the other hand, despite promotional efforts, fluid milk consumption has been on the decline since the 1940s. The current dietary recommendation is three glasses per day for individuals eight years old and up, the basis behind the American Dairy Association's "3-A-Day." Unfortunately, most people don't drink that much milk - not even close

A report released last month, titled "Why are Americans consuming less fluid milk? A look at generational differences in intake frequency," summarizes research done by the USDA Economic Research Service. A glass of milk with dinner used to be very common, but the data indicates that isn't the case right now. Instead, there has been a steep drop in fluid milk consumption over time.

Why the change? Each decade brings a wider selection of soft drinks, sports drinks, bottled water and other beverage choices, all competing for the consumers' appetite. More meals eaten away from home could be another contributing factor.

In addition, as each generation grows up less accustomed to their parents drinking milk, those habits very likely carry with them into adulthood. According to the Dietary Guidelines for Americans, 2010, individuals "who consume milk at an early age are more likely to do so as adults."

How can the dairy industry encourage consumers, both young and old, to drink more milk? How can we be sure our healthy, high-quality dairy products are processed, packaged and priced in a way that appeals to consumers' needs and wants? This is no small task, and it will take work beyond government and checkoff programs. June Dairy Month is wrapping up, but the job promoting milk consumption has just begun.