Capitalize on your calves’ routine

Calves housed in groups will eat according to their daily pattern. 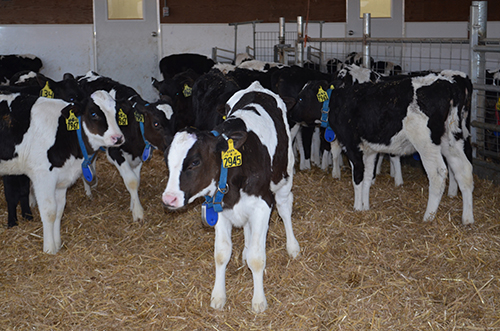 Producers have options for ad libitum, or free access feeding, as shared by the July 2013 William H. Miner Agricultural Research Institute Farm Report. This style of feeding is a key component when group housing calves and can be successful with proper management. Some benefits include more frequent meals, improved growth rates and less labor. However, using milk replacer or acidified milk in a mob feeder can be inconvenient with the need for cooling down, reheating and agitation. The Miner Report offered producers some options to give the calf what it needs while also making ad libitum feeding more convenient.

The report focused on two studies concerning the calves' daily eating habits. One study provided milk replacer and measured the meal size during five different periods throughout the day. Although the calves had access to milk replacer all day, they drank more than 95 percent of their daily intake in two, 2-hour periods.

In another study, calves were given unlimited access to milk twice daily, for two hours at each feeding. Calves began to recognize when they would be fed and adjusted their behavior accordingly, eating for a longer time during each period as compared to ad libitum fed calves. Calves benefited from both options, as they consumed similar amounts of milk and had equivalent growth rates.

These studies show that producers can play to the patterns of their calves. When calves eat may be more dependent on their "circadian," or daily clock, than availability of milk. Four hour ad libitum feedings given at the right time can be a producer's answer to optimizing their calves' consumption without the inconvenience of feeding all day.