Take a stand for cows that can’t

Down cows deserve special care to bring them back to health or, if necessary, to a humane end. 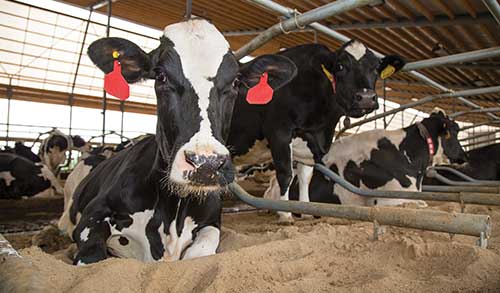 All cows must stand now and then to restore normal blood flow in their leg muscles. Down cattle unable to rise for an extended period of time are likely to experience permanent muscle damage.

Down cows are the unfortunate result of some illnesses and injuries. Although we certainly would like to avoid them as much as possible, almost all producers must eventually deal with a down cow.

The term "downer" is used to describe cattle that are too injured, weak or sick to stand and walk. How downer cattle are handled has become a significant welfare issue in the United States and around the world.

Why cows go down
The most common reason for down dairy cattle is milk fever. Most cows promptly treated with calcium will get right back up, but some don't. If the down cow isn't found right away and calcium treatment is delayed, the damage to her muscles may be too severe, and she may never be able to stand again. Another metabolic cause for downer cows is low magnesium or grass tetany, which is usually seen in cattle grazing lush, rapidly growing pastures, particularly in the early spring.

Other causes of downer cattle include trauma or injury of various types. Calving paralysis can occur immediately following the delivery of a large calf that damages the nerves in rear legs as it passes through the pelvic canal. Cattle can also have an accident and break a bone.

Damage to nerves or the spine can result from riding other cows or being ridden. Cattle can also develop cancer in their spinal column, usually lymphosarcoma associated with bovine leukosis virus infection, which pushes on the spinal cord and causes them to go down.

With nerve damage, fractures or injury to the spine, we generally see "bright, alert downers." These are cattle that can sit up, appear alert and typically still have a good appetite. They may even crawl around some with their front legs. These animals can often live for days or weeks, but very few are ever able to get up again.

The other group of downer cattle are what we call "depressed" or "sick" downers. These animals may have toxic mastitis or metritis or some other severe bacterial infection, or they may have gone down from starvation or long-term malnutrition. These cattle are usually depressed and refuse to eat.

Permanent damage occurs quickly
Regardless of why a cow goes down, if she is unable to get up within the first 24 hours or so, her chances of ever standing again are slim. When cattle are down for several hours, the muscles in their rear legs get severely damaged. These muscles are still receiving the normal amount of blood flow from the arteries, which carry blood to the tissues from the heart, but have limited venous drainage of the blood from the muscles.

When venous drainage is severely reduced, the blood pressure rises within the muscle. Muscle can't really expand to accommodate this change in pressure, so these cells begin to die. In cases where cows have been down for several days, it is not uncommon to see firm swelling. This damage to the muscle of the rear legs of cattle is called compartment syndrome.

In one study, 16 healthy cows were placed under anesthesia and made to lie on their side for 6 to 12 hours. Following recovery from anesthesia, only eight of the 16 cows ever got back up. The rear leg that was down on the other eight cows was found to have severe muscle damage. Cattle are just too heavy to lie on their muscles for any extended period of time without getting up and down to restore normal blood flow in the muscles.

Manage down cows humanely
When a fresh cow goes down, we generally suspect milk fever and treat her with calcium. However, if she doesn't get up within a couple of hours, she must be examined to make sure something else isn't going on. When a cow later in lactation goes down, we generally assume she was injured or is very sick. It is important that all down cows are carefully examined as soon as possible.

If the cow has something that can be fixed, like a fracture or an infection, it is critical to get the cow treated immediately and get her standing. Again, once cattle are down for 24 hours or more - even if the main problem is fixed - they aren't likely to get up again.

On hard surfaces like concrete, irreversible muscle damage is almost sure to occur relatively quickly. The best surface for housing downer cattle is deep sand bedding because it is soft and gives cattle good footing. The next best bet is deep straw bedding either in a box stall or bedded pack. Ideally, downer cattle should have shelter from rain and sun and should be separated from other cattle.

Downer cows should be kept sitting up and not lying on their side, which speeds up muscle damage. If necessary, use bales of straw or hay to keep them propped up. It is also a good idea to reposition them every few hours - alternating between right leg down and left leg down. Most importantly, down cows need clean water and feed at all times.

Movement of downer cattle can be very difficult and should be done as humanely as possible. Cattle can be gently rolled onto sleds or a farm gate and pulled with tractors. If rolling a cow onto a gate, attach a tarp to the gate to protect her from contact with the ground. Cattle can also be gently placed in large front-end loaders for transport. Cattle should not be dragged on the ground using a forklift or skid steer. In fact, several states have laws against dragging down cattle.

Hip lifters or hip clamps can be used as long as the cow is able to stand on her front legs. Large slings or belly bands are available as well to lift cattle and help them remain standing. Flotation tanks are another option. They use water to gently lift downer cows to a standing position without the pressure-muscle damage that can occur with hip lifters or other devices.

Down cattle should be examined daily for any change in their ability to stand. The chance of improvement is very slim if the cow does not show any sign of movement within three or four days after being moved to a location with good footing. Although cattle have gotten up after being down for a week or more, this is very uncommon. If the cow becomes depressed, quits eating, starts to lose body condition or develops ulcers or erosions on her legs, then euthanasia is generally recommended.

The handling and slaughter of downer cows has been a major animal welfare concern in the last 20 years, and a federal rule has been in place to prevent this practice since 2003. It remains against the law for an FDA-inspected facility to accept a cow that cannot stand and walk into the plant for slaughter.

Unfortunately, undercover videos recorded by animal rights groups showing inappropriate care of downer cows have made it to the media. Now, more than ever, you need to have a plan in place for handling down animals in a humane manner.