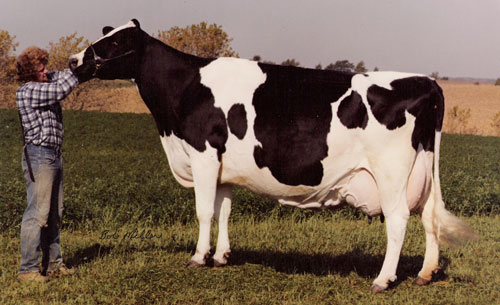 Before there were digital cameras and Photoshop software, print film and negatives dominated the world of cattle photography. That left less margin for error when taking cows photos.

In addition to being an embryo transfer pioneer and a world-renowned dairy cattle breeder, Bob Miller was an accomplished dairy cattle photographer. And if there was ever the perfect picture of a dairy cow, it was the one taken by Bob Miller of his famed Glenridge Citation Roxy EX-97 4E.

While most photo crews generally require four to five people to take a photo, in addition to the photographer, Bob took that famed photo with just three people . . . Bob, his wife, to gain Roxy's attention, and his son at the halter.

And it was that memorable and vivid image of Roxy . . . along with her ability to pass on her genes through maternal lines in ensuing generations . . . that created a lasting impression and allowed her to capture the Queen of the Breed honors, not once, but twice.

To hear the full story, click here to listen to the audio file as Bob Miller recalls over two and a half minutes how he captured that special image. And with props to Paul Harvey, here is a story that will make you even more impressed with that Roxy image.

Editor's note: This is the second article in a five-part Hoard's Dairyman Intel series discussing dairy cattle breeding with Bob Miller and Frank Regan who are among the most respected Holstein breeders in the world. The interview took place at a panel discussion moderated by Hoard's Dairyman managing editor, Corey Geiger, at the Wisconsin Holstein Association Convention.

Click to listen to the March 31 Hoard's Dairyman Intel audio "If you were to start a new herd."