Time does about face on butter 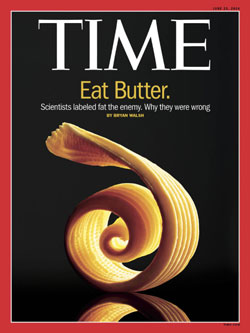 The campaign against fat has been widespread and sweeping, affecting consumer purchasing decisions since the 1960s. In particular, Time magazine played a leading roll in the promotion of margarine as the healthier alternative to butter. The creator of this campaign was Dr. Ancel Keys, an American physiologist who was integral in developing rations for the U.S. Army during World War II.

Keys believed saturated fats were the leading cause of heart disease because of their high caloric values and cholesterol levels. In 1961, the American Heart Association endorsed Keys' hypothesis on fat, and the war against saturated fats was on. That same year, Keys was featured on the cover of Time magazine, and margarine sales flourished while butter purchases plummeted.

Today, after additional research and failures to curb obesity and type 2 diabetes, researchers are singing a new tune. Many modern researchers are pointing to high caloric intake and artificial ingredients as the culprit for our current health challenges.

The pendulum has once again swung the other direction, and consumers are buying more foods with shorter ingredient labels. To follow suit, Time's June 23 cover had a picture of butter, and its feature article described the rise and fall of artificial ingredients.

In line with this trend, butter has once again won favor with the American people. For the past three years, Americans have purchased more butter than margarine and are expected to eat an average of 5.6 pounds or 22.5 sticks of the product this year per person amounting to around $2 billion in sales.