Would component pricing work in the Southeast?

Multiple component pricing has the potential to raise the value of producer milk in the pool. The magnitude of the increase will depend on the solids-nonfat and utilization of milk in manufacturing classes.

By John Newton, American Farm Bureau Federation
The author is a clinical assistant professor in the Department of Agricultural and Consumer Economics at the University of Illinois at Urbana-Champaign. 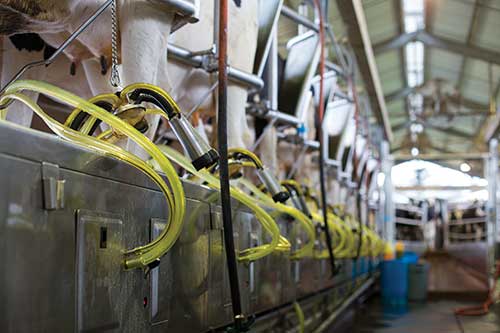 In recent years, milk proteins have become a major value-added product in both domestic and international markets, driving the price of milk to record highs. However, across portions of the U.S., the milk pricing regulations are not designed to price all of the milk components that give milk its functional and economic value - specifically butterfat, protein, other solids and even somatic cell count. Instead, in the Arizona, Southeast, Appalachian, and Florida Federal Milk Marketing Orders (FMMO), the milk pricing regulations are based solely on butterfat and skim pricing and do not formally reward dairy farmers for producing milk proteins.

In the Southeast, the rising value of milk proteins combined with the region's alternative milk pricing scheme is believed to have contributed to challenges related to milk procurement. For example, the seasonally-deficit Southeastern milkshed overlaps with adjacent marketing areas and milk often moves in spite of regulations to maximize the regulated milk price relative to the milk pricing provisions.

In light of these realities, there has been a renewed interest in the southeast U.S. to consider abandoning the existing milk pricing system (skim fat) in favor of adopting multiple component pricing.

Multiple component pricing is a very equitable idea. It's based on the concept that the regulated price of milk received at the farm level should reflect the functional and economic value of the milk. Under component pricing, farmers with higher (lower) levels of butterfat and solids-nonfat receive higher (lower) regulated minimum pay prices per hundredweight of milk than farmers with lower (higher) milk component levels.

Simplifying the terms of trade among milk buyers and sellers by placing value on the unique product attributes of a dairy farmer's milk helps to drive milk to its highest value and best use. This could facilitate more orderly marketing conditions and would create economic incentives for farmers to increase component productivity.

FMMOs do not prevent plants from paying more for high-quality or high-component milk. Instead, FMMOs act as a "market referee" between milk buyers and sellers by establishing and enforcing only a minimum price of milk that must be paid to dairy farmers. The market often self-corrects and milk prices above FMMO minimum prices are paid to dairy farmers. For example, premiums may be paid for balancing services, milk quality or milk components.

Don't expect all of these monies to flow directly or evenly to dairy farmers' milk checks. Actual benefits would depend on the market's response to component pricing. Dynamic economic impacts such as a redistribution of pool dollars, reduced premiums, or changes in the demand and supply of milk and milk components could increase or decrease the farm-level milk price.

Bottom dollar
Bottom line, the total dollars in the pool is likely to grow under multiple component pricing. However, important questions remain: "Where will it come from?" and "Who will get it?"

Farm-level milk prices are not independent of retail prices or plant operating margins. The additional pool dollars must come from consumers, farmers, processors or some combination of the three. Thus, by changing the pricing regulations, the potential exists for consumers to face slightly higher milk prices, dairy farmers to face premium reductions, and milk processors to face reductions in plant operating margins.

Who gets the additional money will depend on farm level factors such as genetics and nutrition. Farms who have invested in bolstering their milk solids by improving feed efficiency or choosing more productive animals may experience greater returns from component pricing; farmers with below-average milk components will likely receive less. As a result, multiple component pricing would shift the distribution of pool revenue from producers with below average component levels to producers with above average component levels.

"Is this distribution more equitable?" is the question Southeast dairy farmers may soon need to answer.

At the time of this article, dairy farmers have yet to petition USDA to consider the adoption of multiple component pricing. However, as discussions ensue, this article should assist farmers in their effort to consider multiple component pricing. It is likely that milk proteins will continue to be a major nutritional and economic value-added dairy product in both domestic and international markets. Implementing a more uniform pricing scheme across large portions of the U.S. will help to improve component productivity and drive milk to its highest valued and best use.

This article appears on page 491 of the August 10, 2014 issue of Hoard's Dairyman.
Related

A legacy lives on
Features
Related to:
features, milk prices
In Features

My cows’ teats are cleaner than your hands
By John Newton, American Farm Bureau Federation