A race between Phase 1 and spring flush 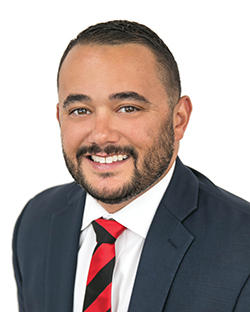 Make no mistake, China is hungry for dairy products. During 2018, China purchased $10.8 billion in dairy products from around the globe — making dairy China’s second-largest agricultural import behind soybeans. While the U.S. has lagged other major dairy exporters in sales to the Chinese market . . . by a significant amount . . . the Phase 1 deal signed earlier this month could put U.S. dairy farmers in a much more competitive position.

Of the $10.8 billion of dairy product sales into China, the European Union and New Zealand were the dominant suppliers at a combined $9.2 billion — a market share of 85%. At slightly more than $600 million in sales, Australia was a distant third. The U.S. was the fourth-largest supplier into the Chinese market with $499 million in sales during 2018. That’s roughly 5.4% of Europe’s and New Zealand’s combined sales.

The United States’ nearly $500 million is nothing to shake a stick at. Of the $5.5 billion in U.S. dairy exports in 2018, China was the third-largest buyer behind our USMCA (United States-Mexico-Canada Agreement) friends, Mexico and Canada.

Chinese tariffs on U.S. dairy products played a major role in driving down sales as did African Swine Fever. Chinese purchases of dry whey, used as an animal feed in hog production, plummeted by $62 million in 2018, while sales of other dairy products declined by $14.5 million.

U.S. dairy product sales to China in 2019 are on pace to ship somewhere in the neighborhood of $375 million — the lowest since $385 million in 2016 and $362 million in 2011. Even still, the U.S. dairy industry has a much larger position in the Chinese market than it did a decade ago when China purchased only $137 million worth of U.S. dairy products as shown in the figure. 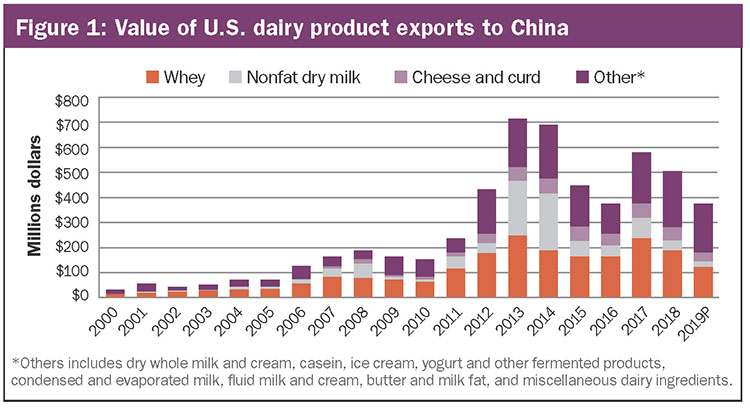 Then, China is also striving to buy an additional $5 billion per year in U.S. agricultural products. All told, with the Phase 1 accord, China must make good on some $81 billion in agricultural purchases from the U.S. in two years. Has Ceres, the Roman goddess of agriculture, provided us spoils from the trade war, or is it too good to be true?

I wouldn’t go buy those big green or red tractors just yet. And if 2014 taught us anything, I wouldn’t go adding cows either. Rod Tidwell, the star wide receiver associated with our favorite fictional sports agent, Jerry Maguire, has a family motto that rings true right about now: “Show me the money.”

Most in the trade world will watch USDA’s weekly export data to see if and when the Chinese accelerate purchases of U.S. grains, oilseeds, and pork products. Unfortunately, weekly export data is not available for dairy products, but monthly data from USDA’s Foreign Agricultural Service and on-the-ground perspective from our dairy supply chain partners will help us monitor if the Chinese are keeping up with their end of the bargain with respect to dairy. That will be a tall order considering the Chinese still have tariffs on a variety of U.S. dairy products.

If we look past the purchase commitments into years three and four, there are some other tangible benefits for U.S. dairy. Among the key achievements of the Trump administration is the commitment to reduce nontariff barriers to trade, such as recognizing the U.S. oversight system for plant inspections, reducing the regulatory hurdles for getting facilities and products approved for import into China, and reducing unnecessary audits and inspections. U.S. exporters must still register to sell into the Chinese market, but reducing these barriers will make it easier for U.S. dairy product suppliers to enter into and stay in the Chinese market.

With global dairy production moving from a long market to a short market, prices rebounded in late 2019. But going into the spring flush there is some uncertainty. As of the writing of this article, Class III and Class IV milk prices for all of 2020 average at or above $18 per hundredweight, well above the five-year average.

If China steps into the market in a big way and demands more dairy products, we could see prices get a big boost. However, if Chinese purchases remain sluggish and the spring flush in the U.S. is as advertised or better, prices could show some weakness.

Dairy Margin Coverage remains unlikely to trigger given the robust milk price cushion, and enrollment is already closed. However, Dairy Revenue Protection is sold daily and should be on your risk management radar just in case.

Five reasons milk checks are living in the present

Hoard's Dairyman Intel
Where is Farm Bureau on supply management?

Milk Check Outlook
Should we take federal orders back to the basics?
comments powered by Disqus