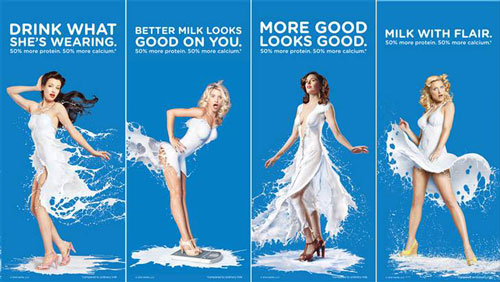 Is it really surprising that the campaign failed? If this was geared toward women, what can you say? No thanks! I'd rather be seen as a strong, fit woman, not a pinup.

Who was the original milk pinup calendar popular with? Were the buyers of the calendar women? If so, then that ad campaign would have made sense, but my guess is that women were not the ones posting the calendar in the office break room, in the women's changing room or in their homes.

Take a look at the ads in different workout magazines, or even just glance at the covers. Those women may not be fully clothed, but the clothing they are wearing is geared towards self-improvement - workout clothes. The clothing in the milk ads are not meant for that at all.

Drive with the fact that Fairlife has more calcium and protein first. Play that into the fact that more people are trying to become fit. A lot of my female friends are doing 5k or 10k races because they are fun to do (just Google "Color Run"). They aren't trying to come across the finish line first, they simply want to improve on their personal best, knowing that this goal will help them become healthier, leading to a, hopefully, longer, more fulfilling life.

I would rather see an ad showing an average woman downing a Fairlife after a race and knowing, since she just consumed that nutrient-packed beverage, that she still has the energy to make supper for her family when she gets home or finish that grad paper that is due next week or pull off that nonprofit banquet she's been planning.

Please don't make us into pinups. We work way too hard to drop to that level. Maybe they were trying to place Fairlife in the same spectrum as Victoria's Secret or a perfume.

Then, my other thought was . . . Did they not even remember what made Diet Coke popular in the 80s and 90s?

Here's hoping for a better ad campaign that can show what Fairlife can really do!