Opening the door for the next generation 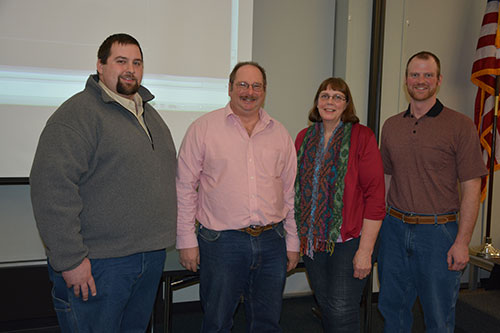 Ben, Ron, Julie and John Lawfer of Kent, Ill.
Transferring the farm from one generation to the next is no small feat, and every family faces its own challenges. One farm that recently created a successful partnership between two generations is the Lawfer family of Kent, Ill.

Second-generation dairy producers Ron and Julie Lawfer have four children, and after graduating from the University of Wisconsin-Platteville, one son, John, was ready to join the operation full time. Another son, Ben, is also involved in addition to running his own dairy nutrition company.

To bolster production and accommodate John, the Lawfers made some changes, including a new freestall barn and two robotic milkers added late last year. Today, the family is milking 140 Holsteins, Brown Swiss, Ayrshires and Jerseys.

The Lawfers have learned from their own experiences and from the wisdom of others, and they were able to share some advice and insights at the 2015 Dairy Summit held in Freeport, Ill., last week.

Ben added, "We as siblings got together, too, without our parents. We determined that we all wanted to see the farm continue on. Whoever was in the driver's seat, we all wanted them to succeed."

Attend workshops
The Lawfers went to several meetings and workshops before they started the process. They learned a lot and also realized that they as a family were in a better situation than many others. "It only takes one person to really wreak havoc for everyone else," John said.

Recognize and respect individual's strengths and weaknesses
"We depend on each other to keep the farm working," John explained.

Flexibility
The Lawfers also noted the importance of being flexible and preparing for the unexpected. When it comes to transferring the farm, "There's no right answer," Ben said. "It's a family, but it's a business, too."

"The main goal is to keep the family farm going," John added.