Why feeding strategy is so important

There seem to be clear benefits to feeding for fewer refusals. The key is consistent intakes.

By Bill Stone, D.V.M.
The author is a dairy veterinarian and nutritionist who provides dairy technical support for Diamond V.

Startegies to reduce feed bunk refusals are attracting greater attention as feed remains a big part of our costs. Cutting back on refusals goes hand in hand with accurately preparing rations. Nutrition experts always emphasize practices that can improve intake, such as pushing up feed, feeding multiple times per day, and keeping all spoiled feed out of the diet.

However, feed is expensive. Each dry matter percentage point of refusals costs approximately 5 to 6 cents per cow per day or approximately $20 per cow per year. Often, dairies will target the greatest amount of refusals for the fresh groups (about 3 to 5 percent), somewhat less for high groups (1 to 4 percent), and the least for late-lactation groups (0.5 to 3 percent).

What should you do with the refusals? Some dairies simply add them to the manure pile. That is expensive and could cost a dairy up to $100 per cow per year.

Refusals could be fed back to the late-lactation groups. This approach can work, but the feeder needs to monitor refusals carefully. You must have the option of discarding refusals if they start to heat, spoil, or appear to be of low quality. With this approach, the refusals from the late pens should be discarded daily or possibly fed to a "low impact" group such as a pen of steers or possibly the bred heifers.

I have often heard the comment, "The dairy industry certainly could learn a lot by observing how feedlots manage their feed bunks." In one beef research trial, steers either were fed ad libitum (similar to dairy cows fed to a 5 percent refusal rate), or they were fed a "managed delivery" amount based on the size of the steers and a desired level of gain. The amount fed to the ad libitum group was adjusted based on the refusal level, but the goal was to always have a surplus amount of feed. As a group, the "managed" pen did not have the opportunity to "overeat" because they were only provided with a predetermined amount of feed. Interestingly, both groups gained at exactly the same rate, but the ad libitum group had a greater number of "poor doers," probably the result of additional ruminal indigestion and acidosis.

Intakes and refusals for a 90-cow group averaging 105 pounds of 3.5 percent fat milk at 130 days in milk (DIM) are shown in the graph at left below. Intakes and refusals averaged about 57 pounds and 3 percent, respectively. Forages at this dairy are removed from the bunker with a defacer and then pushed into a pile before being fed. Forage dry matters were run several times per week. BST was administered on a 12-day interval.

The graph at the right below contains intakes and refusals from a 320-cow group averaging 97 pounds of 3.6 percent fat milk at 190 DIM. Intakes and refusals in this group average about 57 pounds and 0.5 percent, respectively. Forages at this dairy are removed from the bunker at the beginning of the feeding day, dumped into the mixer truck, and then mixed briefly and moved to a location adjacent to the commodity shed. This procedure makes for a consistent forage (DM, fiber, and fermentation profile) from loader bucket to loader bucket, and enhances load preparation when feeding commences.

In addition:
• Forage samples are collected from the premixed piles, and daily dry matters run using multiple vortex dryers.
• A typical load of feed for the lactating cows contains only four ingredients . . . corn silage, haylage, corn meal, and a grain mix. This helps to enhance speed and accuracy of load preparation.
• An inoculant including Lactobacillus buchneri was used at ensiling to minimize heating during feedout.
• They added water to the TMR to minimize sorting.
• Pen counts are verified before feeding.
• Half of the eligible cows in each pen get BST every week.
• Delivered feed is raised or lowered by 0.5 pounds dry matter per cow if the refusal rate varies from 0.5 percent.

This collection of steps along with the low rate of refusals result in very stable intakes. The refusals typically look very similar to the TMR despite their relatively small amount. This is a function of the quality of the forage, the effort to keep any spoiled forage out of the lactating cow diet, the forage chop length (a minimal amount of excessively long forage), and addition of water to minimize sorting.

Many dairies plan on having a relatively high refusal rate because they don't want the cows to run out of feed "in case they eat really well that day." Although there can be fluctuations in pen intake, and they possibly occur more frequently in herds with high refusal rates, often the perceived change in intake was only that, a perception. In fact, usually the group intake essentially was the same as it had been, but something was amiss. Possibly a load of feed contained forage with a different dry matter, or all of the forage changed in moisture, or feed was not pushed up and, hence, out of reach for several hours, or it was not properly distributed along the bunk, or pen counts were not accurate, or something else was slightly off.

Accurately preparing rations helps to stabilize intakes and reduce refusals. Among the habits and routines that support accurate ration preparations are properly collecting forage samples for analysis, having a clear understanding of the dry matter concept, recognizing the benefits of accurately and properly preparing a load of feed, having goals for refusal percentages and a clear program on how the feeding rate should be adjusted based on refusal amount, and how these refusals are handled.

Cows have a way of talking to us
Features
Related to:
nutrition, TMR
In Nutrition

Are you mixing feed in the right spot?
By Bill Stone, D.V.M. 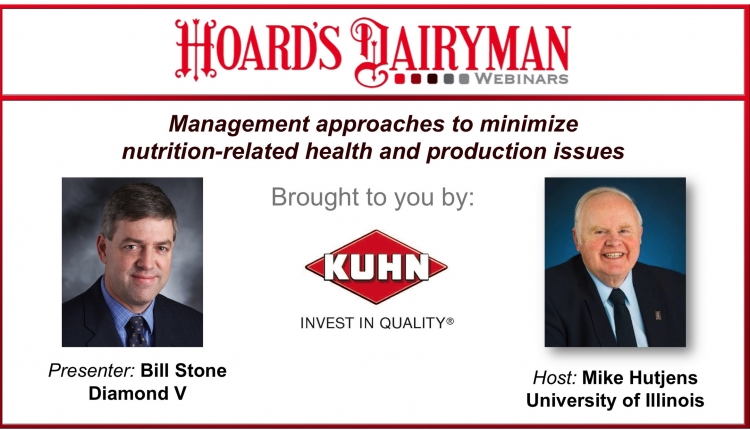