How many corn hybrids should you plant?

Should you plant only one in an effort to feed corn silage of uniform quality each day, or should you plant several hybrids to reduce the impact of a single hybrid performing poorly?

Since there's no standard maturity ratings for corn hybrids,
university trials can help better predict maturity dates.
Recently, one of the dairy nutritionists who help balance rations for the Miner Institute dairy herd suggested that it would be much simpler for him if we only have one corn hybrid in each of the several bunker silos we use for corn silage. (We've been planting five or six hybrids each year, in a narrow range of relative maturities.) Not sure that this was a good idea, we asked a few agronomists and dairy scientists for their opinions on the matter.

Not surprisingly, opinions differed . . .
Dairy nutritionists prefer corn silage quality (at least that fed a particular group of dairy cattle - high production cows, fresh heifers, and so forth - to be as uniform as possible) whether this means planting one hybrid or a dozen. They seem to favor the KISS principal: Keep It Simple, Stupid.

One state university agronomist I consulted said that some farmers in his state already grow a single hybrid on all the acres for dairy herd sizes up to 500 cows. However, when asked his opinion about planting a single hybrid on that much acreage, he said: "I'm a bit uncomfortable with it and would like to see them diversify with some hybrids with similar quality profiles. If they insist, then I think it's best that they stick with a relatively new, high-yielding and high-quality, but proven hybrid that has tested well under a number of conditions."
He also said that that farmers should select four to six hybrids with similar (and above average) quality profiles and avoid mixing dual-purpose, high-grain hybrids with leafy, high-fiber hybrids. These four to six hybrids may need to be of slightly differing maturities so that each can be harvested at the ideal stage.

In selecting a group of hybrids of the same or similar relative maturity (RM), it's important to rely on university-run corn silage trials whenever possible. That's because there's no standard maturity rating for corn hybrids, and what Seed Company A calls a 100 RM hybrid may be somewhat earlier (or later) than Seed Company B's 100 RM hybrid.
One Pennsylvania farmer says that he has a neighbor plant several 110 RM hybrids and then hires a contractor to harvest the crop. Because both planting and harvest is normally completed in only a few days, you might think that the silage would be at close to the same maturity. However, he's found dry matter differences of up to 10 percentage points from one hybrid to the other. University silage trials confirm that the maturity variation between different seed companies' "100-day hybrids" can be significant.
When choosing one hybrid . . .
If only one hybrid is used to fill a silo, it's obviously very important that the hybrid chosen has a proven track record for both yield and quality since you are putting all your eggs in one basket, so to speak. Equally as important is the consistency of performance from year to year.

In talking to two respected university agronomists, I found some difference of opinion on how much difference there is in the same corn hybrid from one year to the next. One said that, while some hybrids are relatively consistent performers, others vary both from year to year and from location to location. He cited research of two hybrids that had performed consistently well in one location, but their performance in a trial in another part of the state was quite different. One of these hybrids did as well as expected, while the second hybrid had somewhat lower quality than expected. However, the other agronomist I consulted doesn't think variation in silage quality is a problem: The hybrids producing high-quality silage one year are likely to be above average performers the next year, too.

Field sizes and silos vary . . .
How interested a farmer is in using only one hybrid for all his silage may be influenced by the type of silage storage on the farm, and also on field size and soil variability.

For instance, assume that a farmer has a 2,000-ton stack or bunker silo for corn silage that, at a yield of 20 tons per acre, will take 100 acres of corn to fill. If the farmer has one or two large fields totaling 100 acres, he may well be able to plant and harvest a single hybrid and wind up with corn silage that's quite uniform. However, if the farmer has an average field size of 10 acres (which just happens to be the average field size at Miner Institute), it would take 10 fields to fill the silo. And, if the soil drainage and fertility in these fields ranges from "pretty good" to "not so hot" (also the case at the Institute), there's a slim chance indeed of harvesting 2,000 tons of corn of uniform quality whether using a single hybrid or several.

A reasonable middle ground is possible if the corn silage is stored in silage bags. Most bags have a capacity from 150 to several hundred tons of silage. With silage bags, the farmer may be able to fill a bag with the corn forage from one field. By getting a forage analysis of the silage in each bag a week before starting to feed it, there would be fewer surprises. And dairy nutrition consultants hate surprises - at least this kind. Small tower silos can often be filled with one hybrid without much problem, but as the size (and capacity) gets larger this becomes more unlikely.

Bunker experiences . . .
At Miner Institute, we filled one 25-foot by 160-foot bunker silo in September 2004 with 800 tons of brown midrib (BMR) corn silage, about 80 percent of which was one hybrid. Because the hybrid representing the other 20 percent was harvested last (and therefore was fed out first), we should be able to get a good idea of the variability of the hybrid that composes the rest of the silage. This silage came from three fields planted and harvested within a few days of each other. We took monthly forage samples from this silo over a six-month period. With the exception of one month (where both dry matter and net energy were unusually high), dry matter ranged between 29 percent and 31 percent while net energy was between 0.76 and 0.79 Megacals. Not perfect perhaps, but neither is this the type of variability to strike terror into a dairy nutrition consultant's heart.

Our brief experience with the BMR corn silage notwithstanding, in most cases farmers should spread their risk by planting at least a few hybrids that have a proven track record for both yield and silage quality. You can then plant a few units of a new (and supposedly improved) hybrid. Better safe than sorry. 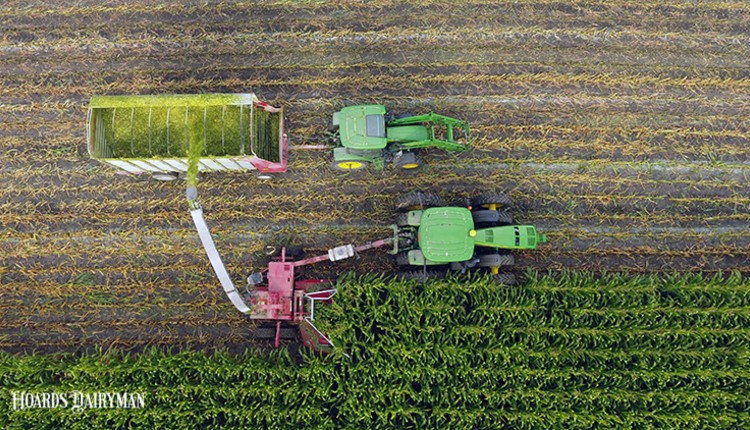