BUTTERFAT PRICES SURGED to $2.95 per pound this July, reported Federal Milk Marketing Order administrators. At the same time, milk protein values fell to a 16-year market low at $1.2248 per pound.

WITH NEWFOUND CONSUMER INTEREST in higher fat dairy foods, butterfat has shifted to contributing north of 50 percent to the All-Milk price. For additional perspective, see page 501 in this issue.

LOWER MILK PRICES IN 2016 meant higher operating losses for Western dairies, reported Genske, Mulder & Company. All areas in the summary lost money, but Upper Plains states and Texas lost much less of it. California and Colorado, on the other hand, lost a lot more of it.

WITHIN CALIFORNIA, the cost to produce milk fell to $17.30 per cwt. during the first quarter of 2017. It was down $1.14 per cwt. from the same time last year and that was the lowest cost of production figure since 2011, according to the California Department of Food and Agriculture.

AT $9.33, JUNE’S MILK MARGINS after feed costs climbed to the best levels since March as calculated by USDA’s Margin Protection Program (MPP-Dairy). In January, margins had reached a 2017 best of $11.06.

MILK REMAINS PLENTIFUL despite growing sales. “The combination of heavy milk supplies, disruptions at several processing facilities, and difficulty moving milk to alternative facilities . . . has led to some distressed milk moving at $4 to $5 under class,” wrote Dairy Market News editors.

PLANT EXPANSIONS ARE UNDERWAY: Valley Queen Cheese, Milbank, S.D., will increase capacity by 25 percent to reach 5-plus million pounds a day; AMPI will grow its Sanborn, Iowa, plant from a 1.4 to a 3 million-pound-a-day capacity; Bongard’s Creameries will invest $35 million in its Humboldt, Tenn., facility, while Upstate Niagara acquired the Kraft-Heinz plant in Campbell, N.Y., and will modernize it.

DISEASES THAT CREEP.
Don’t let unwanted health risks sneak on to your dairy.

A SEAT AT THE PRESIDENT’S TABLE.
A Michigan dairy farmer welcomed the chance to discuss agriculture with the President of the United States. 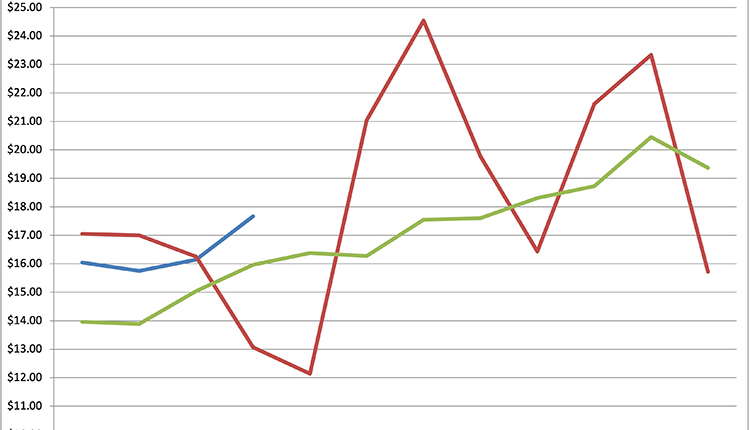