From great pageantry to big dollar bids, World Dairy Expo sales attract some of the best.

By Karen Bohnert, Illinois dairy farmer
The author and her husband work in partnership with family on a 450-cow dairy in East Moline, Ill. 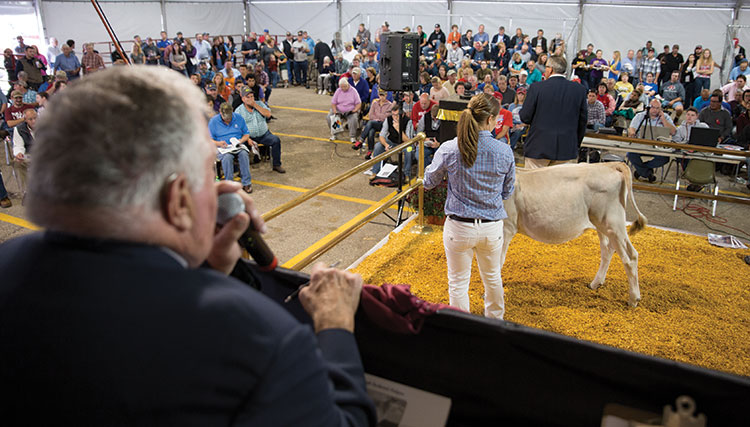 The breed sales played an integral role in funding the initial years of the show, and today the sales bring the best consignments and buyers together.
Some of the world’s best genetics are offered for auction at the various breed sales held at World Dairy Expo. And while some things have changed since the inception of the breed sales, which began in 1967 to fund the very first show, much has stayed the same.

Tom Morris has the longest run as a sales manager at Expo having spearheaded the World Classic Sale held in the Coliseum for nearly three decades. “Our drive is to offer the most sought-after Holsteins,” he said.

Morris stated that the biggest change he witnessed was the debut of genomics and noted it was indeed a game changer.

Norm Magnussen, Norm Nabholz, and Neal Smith all echoed Morris’ sentiments in regard to the role genomics played in selling cattle.

“The formula is simple,” said Nabholz, who introduced the World’s Choice Jersey Sale in 1990, which has since morphed into the Top of the World Jersey Sale. “High genomic animals equate to big dollars, and that is certainly how breed sales, especially Holsteins, have changed over the years. Genomics has not only been a game changer, it has exploded marketing cattle to a new level,” he explained.

Nabholz has helped with a variety of Expo breed sales over the years. In the mid-70s, he began by working with David Bachmann, who managed the World Premier Holstein Sale at the time. Nabholz also helped with colored breed sales for a few years and read pedigrees under Morris’ management a couple of years. “I definitely had a backseat position compared to Morris or Bachmann,” Nabholz stated.

“Another thing that has changed that many attending don’t realize is the cost associated with managing a sale,” said Magnussen, who manages the Brown Swiss Premier Showcase. “The length of time of having cattle on the grounds has increased over the years, adding to the cost.”

Nabholz and Smith, the National Jersey Cattle Association’s executive secretary, agreed. They said that the breeds hold their respective sales to promote their breed and services.

Morris also pointed out their commitment to World Dairy Expo. “We promised Expo’s board that the World Classic will be one of the top Holstein sales of the year,” said Morris. “And we have done a pretty good job on delivery of that pledge.”

Morris is proud of managing the World Classic Sale every year since 1989. “I worked for many of my forefathers who paved the road for the World Classic,” he said. “It’s undoubtedly a challenge to do this sale year after year, but at the same time it’s exciting to deliver on our promise.”

Magnussen’s father was one of Expo’s founding fathers and the manager of the very first sale, so he, too, carries a lot of pride and passion in his heart; driving his ambition to manage the Brown Swiss sale at Expo. “For a couple years, Expo had a donation sale to raise money to establish World Dairy Expo,” he said. “My second 4-H calf came from the first donation sale in 1967.”

In fact, this generation of Expo sales managers, including Morris and Magnussen, all follow in the footsteps of the visionaries who led the early sales. Bachmann was one of those integral forefathers. Bachmann co-managed the initial sales in 1967, 1968, and 1969, and returned to the helm in 1975 to manage sales at Expo for the next 13 years. 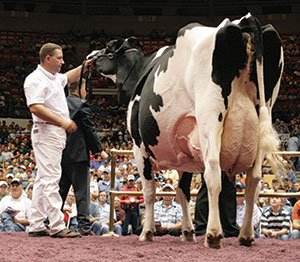 Budjon Redmarker Desire, the 2005 Reserve Supreme Champion, sold as Lot 1 at the World Classic. This is the only time a Grand Champion from the Holstein show has sold at the sale. The next day Desire was first place in the 125,000-pound class.
“Many of the consignments were and still are hand selected,” said Nabholz. “To successfully manage a sale, especially at Expo, you must deliver a diverse lineup — from production to type to high genomic animals.”

It always takes a team of people to help manage the sales, regardless of the breed. That includes those involved in selecting the consignments to those managing the sale and those working behind the scenes. “It takes a crew of people to make a sale successful,” shared Smith.

Nabholz added, “The pageantry of the World Classic Sale has stayed consistent; they have the best sound system, the best setup, and the largest crowd because of the international audience.” Some of this pageantry has also made its way into the Expo showring. Those roots are in an Expo sale, the ABS Americana Sale, that was only held in 1983, 1986, and 1989. At that sale, ringmen wore tuxedos, and the shavings were colored. Following that 1983 sale, Expo debuted colored shavings in the showring in 1984, and judges now wear tuxedos in the ring.

Other sales have expanded because of technology. Although attendance has declined at the Top of the World Jersey Sale, access to watch it virtually through Jersey Auction Live has kept the customer base active. “Many Jersey breeders and enthusiasts are watching and bidding from the comfort of their stalls, either at Expo or back at their farm,” said Smith.

Regardless of the size of the crowd, Smith noted that the Top of the World Jersey Sale has consistently been an elite Jersey sale and offered the variety that buyers want.

Magnussen, who has a long history of managing the Brown Swiss sale and an All Breeds sale in the early days with Bachmann leading the way, has never wavered his focus. “Always selecting high-caliber cattle to go along with the quality of cattle exhibited on Expo’s colored shavings,” he said.

“My earliest memory of the sales was helping Bachmann with a white cow, DRA August, and she won,” Nabholz said. “It meant so much, not only because she hailed from Iowa, my home state, or that she was drop-dead gorgeous, but because she mimicked another cow we had in the herd.”

Nabholz also said watching Nabholz Lady Dianna selling for $15,000, the night after she won Grand Champion, was an unforgettable memory.

“Another great memory was the year I managed the Jersey sale,” said Nabholz. “It was a huge crowd and the excitement was electric, and we had a lot of Holstein buyers purchase their first Jerseys, which made it a really fun and memorable sale.”

Morris said he remembers the 2001 World Classic Sale as if it was yesterday. “It was two weeks post 9/11, and we opened the sale paying tribute to those fallen. The tone was sadness and uncertainty,” said Morris. “Expo was Oscar-themed, the sale crew came into the Coliseum in limousines, and even the calf that began the sale came out of a limousine. All of a sudden people were smiling and getting excited. It was so nice to see a different tone that a few weeks prior nobody had felt.”

Morris added that last year’s sale-topper, OCD Supersire 9882-ET, selling for $270,000, will be hard to match and hard to forget. “We knew she was hot, but holy cow, I don’t think anyone quite expected that.”

Magnussen shared that he has many memories that stick with him but really just a lot of pride from managing the Brown Swiss sale over the years. “I drove home happy many years, having the highest averaged color breed sale there, and it really just makes me content when our average is driven by a group of quality cattle,” he said.

“Some of the cattle we’ve selected to the sale, months prior to World Dairy Expo, have gone on and won their classes at Expo,” continued the long-time sales manager.

Smith said he has a handful of memories that have stayed with him over the years. “What I love the most and really what having a sale is about is the look of satisfaction on a consignor’s face when their animal sells well,” he said. “And, of course, a child buying their first calf.”