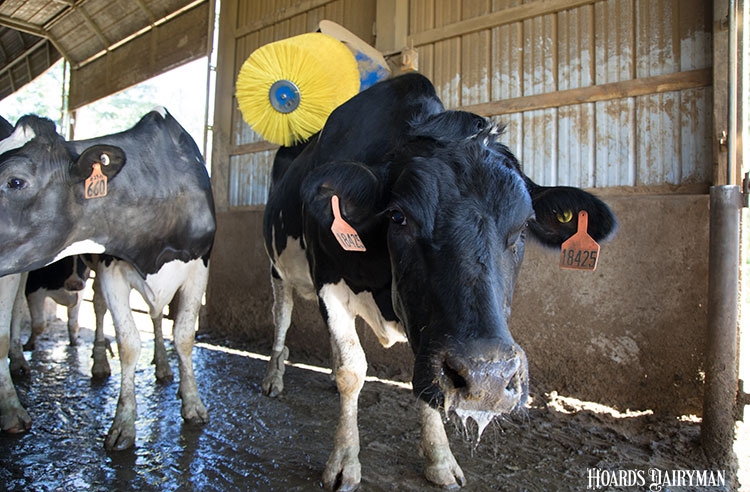 Anyone who has watched dairy cows use large mechanical roller brushes knows it’s pretty obvious they love them.

Cows will regularly wait to use them. Boss cows regularly won’t. When indoor-housed cows have an itch, what are they going to do? Rub up against something hard and stable, of course — except after a while 1,500-pound animals will eventually take a toll on just about anything.

So does it come as a surprise that a just-published research project done in Canada and Poland found that cows are not only highly motivated to use the brushes, but they also have a positive effect on their well-being?

How motivated?
Cows were just as determined to get to the brushes as they were to get to feed, said researchers when commenting on the study.

They measured this by training cows to push open a weighted gate in order to access fresh feed or the mechanical brushes. Once they learned, the amount of weight on the gate was gradually increased until every cow in the study was unable to open it.

The failure point wound up being the same for both feed and the brushes, and the published study results said cows refused to give up: “We observed cows continuing to attempt to push open the weighted gate after they had reached their experimental failure weight.”

One key aspect of the study may have made cows give up earlier than they might have otherwise: All of them were pregnant. The weighted gate pressed against them as they entered the feed or brush area, so doing so may have been uncomfortable.

Very satisfying
Access to the brushes is all about satisfying normal behaviors like comfort, grooming and cleanliness, stress relief, and fly and parasite relief, says Nina Von Keyserlingk, an animal behavior specialist at the University of British Columbia who was one of the study’s primary researchers.

The final statement in the study’s conclusions leaves no uncertainty about the attraction to the mechanical brushes that researchers saw: “These results indicate that the automated mechanical brush is an important resource for cows.”