Wrestling with the elements

The Carlson family exhibits strength and determination — both at the farm and on the wrestling mat. 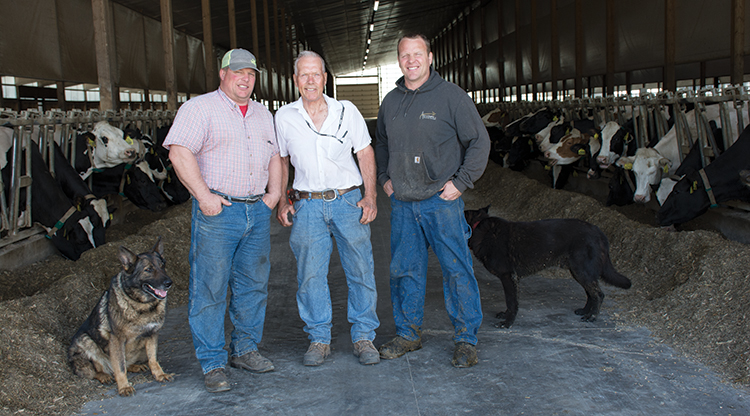 chad, curtney, and carl carlson own and operate Carlson Dairy LLP in Pennock, Minn. Their milking herd is housed in cross-ventilated barns with sand-bedded freestalls.

Wind has damaged their farm not once, but twice in the past two years, but the Carlson family has a fighting spirit that keeps them thriving.

“It feels like we haven’t had a normal day since the storm hit,” said Chad Carlson of Carlson Dairy. Their Pennock, Minn., farm was struck by straight-line winds on June 11, 2017, and they’ve been in some kind of building or repair mode ever since.

Those winds caused significant damage to several buildings on the farm. It ripped part of a roof off one freestall barn, and a shop and heifer barn were destroyed. About 300 cows had to be milked at another dairy until mid-September, while 600 heifers were split between a feedlot and another family member’s farm until the first of December. Fortunately, only three cows and three heifers were lost due to injuries from the storm.

Lightening isn’t supposed to strike the same place twice, but apparently a windstorm can. This past May, Carlson Dairy found itself in harm’s way once again, receiving more damage caused by a storm that quickly traveled through the area. That meant additional repairs to one of their cross-ventilated freestall barns.

While things could have been much worse, these setbacks could take a toll on any farmer. Instead, brothers Chad and Carl are fourth-generation dairy farmers who turned these obstacles into opportunities to move their dairy into the future.

A family of athletes

Physical and mental strength is not a new concept for the Carlson family. Their strong passion for dairy is rivaled only by their love for the sport of wrestling.

Following in their father’s footsteps, both Chad and Carl wrestled in high school. Chad won two state titles, and Carl garnered one. Each brother earned a scholarship to wrestle at the University of Minnesota, where they found more success as Gophers. They also obtained degrees in animal science before returning home to the farm.

The wrestling spirit doesn’t stop there. Chad and Carl each have three sons of their own, and it’s not much of a surprise that the next generation carries on that same love of the sport. Two of the boys, Colten and Clay, are wrestling at South Dakota State University. Cael and Caden are competing at the high school level, and the youngest two, Conlan and Cavin, are already making a name for themselves on the mat. Carl also has a daughter named Kylie.

In all, the family has six Minnesota High School wrestling championships among them . . . and one might expect that more are yet to come.

“We milk cows, and we wrestle,” said Chad. Their farming background, no doubt, has something to do with their success on the mat.

“They are not scared of work,” said Chad when talking about his sons and nephews. “They are always active and using different skills.” He added that it’s not uncommon for them to be wrestling while they are covering feed piles or doing other chores.

The farm was started by Chad and Carl’s great-grandparents in 1891. Their dad, Curtney, took over the dairy in 1975. With two growing boys, the Carlsons doubled their herd size to 60 cows in 1980. “My dad was worried we were going to run out of work,” joked Chad.

After college, Chad returned to the farm in 1995 and Carl in 1996. The herd continued to grow until they were milking 240 cows in the 60-cow tie stall barn. In 2000, they built a double-10 parallel parlor and 450-stall freestall barn. Every four years after that, they added on to the farm and the herd, which is now at 1,500 cows.

The storm damage to their double-18 parallel parlor accelerated the need to update the facility. After a lot of research, the Carlsons selected a 60-stall rotary, robotic parlor. With installation completed in the middle of June, this parlor was just the third of its kind to be functioning in the United States.

“It was an interesting month, but it’s going well,” Chad said, referring to the startup process. “Every day is getting better, and the cows are doing well.”

The Carlsons really liked that they wouldn’t have to dramatically change anything about their management style in order to use the robotic rotary. The freestall barns wouldn’t need to be remodeled and cows would still be brought up to the parlor three times per day.

Their current approach is working well for them, as the herd maintains a rolling herd average just over 32,000 pounds per cow. Quality feed is part of that. The Carlsons do all the tillage on their clay loam soil; they also chop their own corn silage. They hire a neighbor to do their corn planting and to haul feed during chopping. In all, they farm about 1,200 acres of alfalfa and corn silage. They also rent another 500 acres of alfalfa and buy about 500 acres of high-moisture corn.

The Carlsons also focus on the next generation of the herd. In 2014, they built a new calf barn and installed automated calf feeders to reduce labor, especially for Curtney who was doing two of the three daily feedings. Chad said they went with automated feeders because they wanted to continue feeding calves more than twice a day while maintaining the growth rates they had grown accustomed to.

The brothers have been pleased with this addition to the farm. Chad believes the socialization is good for the calves, and the group pens are easier to bed and clean out. He also likes that they can track individual milk intakes and total milk consumption over a calf’s lifetime.

Besides the dairy cattle, Carlson Dairy is also home to 18 Belgium and Paint horses. The horses belong to Curtney, and they are a longtime passion of his. Curtney is still active with the dairy, and it is not uncommon to see him riding a horse-drawn buggy to get to whatever part of the farm he needs to be. His wife, Louise, remains involved with the dairy as well.

Chad gives his dad credit for allowing him and Carl to smoothly transition back home to the farm and for the dairy’s growth over time. “We were lucky Dad was so easygoing and easy to work with,” he said.

Chad also appreciated how his dad let them pursue their childhood interests while still encouraging them to work hard. Chad said his dad’s philosophy was to let them be in whatever they wanted to be, wrestling or other activities, but when they were home, they were working.

Chad and Carl, along with their wives, Kindra and Kellie, have followed a similar model with their children. Although their kids are busy attending practices and camps, they still work on the dairy alongside their fathers, too. And that’s what Chad really enjoys.

“I love when my kids are home from school and working here on the farm with us,” he said. In addition to cows and wrestling, family time could also be the added to the Carlsons’ list of priorities.