Where turtles and cows co-exist

Bog turtles were officially named a 'threatened 'species in 1997, but thanks to the efforts of conservation groups partnering with farmers to preserve habitats, they are close to reaching the 'stable' level.

Finding the first turtle nest on Jones’ property was exciting because at the time Jason Tesauro was only evaluating the potential for turtles to be present. “The discovery of the nest was a new bog turtle record, and it moved the landowner's WRP application to the top of the list," Tesauro said.

Walking through a boggy section of pasture or swampy wetland, landowners in the Northeast may never see one of its oldest inhabitants — the bog turtle. At only 4 inches across, it’s also one of the smallest turtle species, but it thrives in wetlands that often are used to pasture cattle.

Pete Jones, a dairy farmer in eastern New York, partnered with the U.S. Fish and Wildlife Service and the USDA-Natural Resource Conservation Service (NRCS) to initially enroll 20 acres of pasture in the Wetlands Reserve Enhancement Program. The agreement is beneficial to Jones, allowing him to reclaim pasture ground, and to the turtles, which gain a safe place to nest and live their lives.

Author’s note: The bog turtle is in the equivalent of the witness protection program. That being the case, Pete Jones is a pseudonym for the landowner to keep the turtle habitat safe.

We can help you 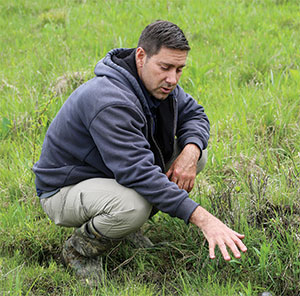 Conservation efforts can be a win-win. Jason Tesauro studied the site for five years and found that the nesting turtles virtually trail the cows, following in their flooded hoofprints.
Jones, who milks 70 cows, was struggling with invasive plants in his fields and asked NRCS for some advice. Jason Tesauro, a contractor for USDA-NRCS, visited the fields and made a surprise discovery. A self-proclaimed “turtle nerd” since 1994, Tesauro found the remnants of a hatched bog turtle nest. The nest qualified Jones for enrollment in the NRCS Wetlands Reserve Enhancement Program (WREP).

Through the program, and with the help of the U.S. Fish and Wildlife Service, Jones would regain his pastures, put conservation easements on a portion of his property, and become steward of a large bog turtle population. An estimated 40 turtles thrive on his lands.

According to Tesauro, landowners and farmers benefit from cooperating with federal conservation agencies. “Landowners get paid from the sale of the wetland easement, based on a per-acre value,” he said. “At one time, this value was as high as $9,000 per acre in New York and even higher in Pennsylvania. Easement rates are lower nowadays but still enticing enough.”

He said dairy or beef farmers can reclaim overgrown, weedy or scrubby wetlands for seasonal pasture. NRCS funds the mechanical clearing of the wetland, the installation of a permanent cattle fence, and provides compensation for grazing.

Grazing is not done on a conventional production scale. “We need to be extremely careful with stocking densities as there is a risk of cattle trampling bog turtles or depleting the vegetation so that there is no cover,” he said. “Under the easement program, NRCS stipulates in a contract with the landowner that grazing be done May through September at the rate of one cow per 2 acres of pasture with no feed subsidies.”

Jones’ property now contains the largest protected turtle habitat in New York. There are 11 other active grazing projects under NRCS in the state, and the technique has been used in other Northeast states and as far south as North Carolina.

Generally, the sites are small, only 2 to 3 acres each, Tesauro said. These are not typical standing-water wetlands, he added, but wetlands that are permanently saturated by groundwater seepage where the water is mostly restricted to the upper horizon of the soils or in shallow rivulets.

Tesauro first began working with Jones in 2009. At that time, he was working for the Environmental Defense Fund (EDF), which partnered with NRCS to enroll landowners with significant bog turtle habitat on their land into NRCS’s easement program called Wetlands Reserve Program, WRP (now WREP).

“EDF viewed WRP as a major conservation tool for helping to secure the long-term protection for bog turtles in light of the ultimate goal of removing them from their federal ‘threatened’ status to ‘stable or recovered,’” he said.

“My job was to promote the program, educate landowners about the plight of the bog turtle, and show them how they could benefit financially, either through improving or expanding seasonal pasture or simply through the sale of a deed restricted conservation easement on their wetlands.”

The financial aspect, Jones admits, was beneficial, helping him keep the farm going while putting his kids through school. “The money was a big incentive,” he said. “The improvement of the land was important as well.”

Jones has benefited from the federal government covering the easement payment, 75 percent of fencing and vegetation, and annual payments for his cows to graze the habitat. “The take-home message is that cattle grazing improved and expanded nesting habitat,” Tesauro said.

At only about 4 inches long, the bog turtle is one of North America’s smallest turtles. They have a bright yellow, orange, or red blotch on each side of the head.

These small creatures are tiny and secretive, Tesauro said, which is why farmers may never see them in their pasture walks. The bog turtles’ biggest threats are loss of habitat and natural predators, like raccoons and skunks.

“Raccoons exist in high numbers and are one of the biggest predators,” he said. “They feed on bog turtles and during nesting season they look for eggs to eat.”

Bog turtle eggs are only an inch long. Eggs are laid in the first half of June along the tops of the grassy hummocks, making them easy targets for skunks and raccoons. Eggs hatch at summer’s end — if they survive.

Tesauro has placed small wire cages on top of turtle nests to help keep them safe during this time. Cages are positioned just above the waterline to keep the predators from snatching them.

He added that bog turtles are popular as pets on the black market, so protected sites are generally kept secret.

Bog turtles usually spend their entire life in the same area they were hatched, eating insects, snails, worms, seeds, and carrion. Tesauro said they can live in densities as high as 50 per acre and have a profound impact on the ecology of the wetland.

So why work to save such a small creature?

“I like to say in response to ‘what are bog turtles good for?’ is that they are symbolic of a healthy wetland and ecological landscape,” Tesauro said. “Landscapes that support bog turtles support healthy watersheds and are often characterized by rich biodiversity.”