Weekly herd checks have made a difference 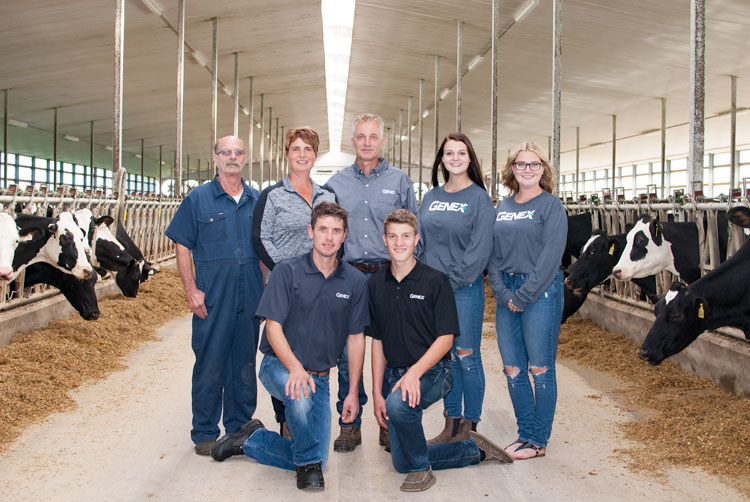 “We believe our herd’s reproductive performance has improved with the addition of every week herd health (instead of every other week),” said Rick Portena, who works closely with his veterinarian John Hunt. “We also raised our voluntary waiting period (VWP) to 75 days,” explained general manager Portena who owns and operates Pendora Farms, in Monkton, Ontario, Canada, and became a first-time Platinum winner of the 11th annual Dairy Cattle Reproduction Council’s (DCRC) annual awards competition.

“At the same time, we increased ultrasound checks from 24 to 28 days,” added his wife, Ingrid. “In our heifers, herd health is still every other week,” herdsman Jesse Boyd also shared.

All six of this year’s Platinum winners of the Dairy Cattle Reproduction Council’s awards share additional insight in this Hoard’s Dairyman Intel as well as the Round Table found on pages 679 to 682 of the November issue of Hoard’s Dairyman. This year’s competition drew the second-largest set of nominations to date — 102 — from 15 U.S. states and seven countries found on four continents.

Here are additional responses to the question, “What changes have you recently implemented or might implement in the near future to improve reproduction?”

Holmesville Dairy, Argyle, Wis.: As breeding has been going really well at the farm, we usually have extra heifers to sell as springers. With the lower milk price, this market has not been as good as in years past. Due to this fact, we have been increasing the amount of beef semen used in the cows and are trying to evaluate how much beef semen we want to use in the future.

Rollin’ Green Dairy, Brooklyn, Wis.: In the future, we are implementing modern heifer facilities to conduct pregnancy checks for heifers and have a solid due date if bull-bred. We would like better housing to improve growth rates and maybe lower the age at first calving.

As our herd production level has continued to climb and our stocking density has followed suit, we feel those two aforementioned changes have helped us maintain and possibly improve our conception rates. We also have seen positive improvements from raising our VWP.

Another technology we have used since 2011 is genomic data on our cattle. We have created a custom index for our herd including both production, longevity, and reproduction. We use this as a tool to cull the bottom 15 percent of our heifers at 3 months of age. This has helped alleviate overcrowding in our heifer pens, as well as enhance the genomic value of our cattle for reproduction.

Over the last decade, after selecting bulls for production, an emphasis has been put on using bulls with high daughter pregnancy rates (DPR) as well as sire conception rate. This has resulted in improved genomic values for reproduction in the herd. We feel with the use of genomic data, along with the proper environment, we have seen improvements in our conception and pregnancy rates in our herd.

As our reproduction has improved, we have utilized the Genex Calf Math system to optimize the number of heifer calves being born on the farm. Through this analysis, we have increased the amount of beef semen being used and also tried more targeted sexed semen on our younger animals that are higher on genomic test results.

We have also been considering the implementation of an activity monitoring system to help with fresh cow health monitoring and heat detection.

Seidl’s Mountain View Dairy, Luxemburg, Wis.: This June, we switched from presynch to the double ovsynch program to reduce the number of cows we have with twins. So far this year, after the first 32 cows on the program checked pregnant, conception is 68 percent. It looks promising.

Victory Farms, Milbank, S.D.: We are not implementing anything new at this time.

Click below to view previous reports from this DCRC series:

He checks for heats morning, noon, and night

Our presynch protocol sets the stage

We closely track our results