Nothing beats walking pens every day 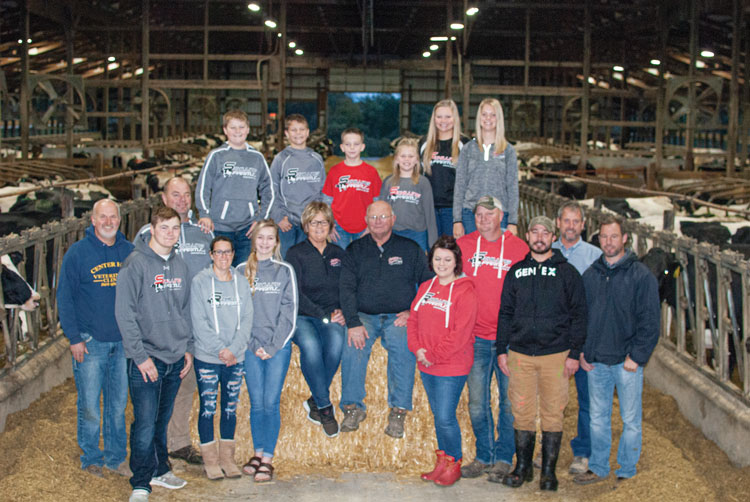 “Cows are watched for heats as soon as the postfresh cows are 25 days in milk (DIM),” said Brian Schilling, a Platinum winner of the Dairy Cattle Reproduction Council’s 12th annual awards competition. “However, cows are not bred based off heat detection until the end of the 78 days of the voluntary waiting period (VWP),” said the Darlington, Wis., dairyman.

As for specifics, “Cows are tail painted with Reveal paint and ‘walked’ every day by Tim Heiring of Genex Cooperative,” Schilling went on to say. “Nonlactating heifers have Estrotect patches applied prebreeding, and then they are painted when confirmed pregnant. The heifers are also “walked” while restrained in headlocks once per day,” said the co-owner of Schilling Dairy.

All six of this year’s Platinum winners of the Dairy Cattle Reproduction Council’s awards share additional insight in this Hoard’s Dairyman Intel as well as the Round Table found on pages 675 to 678 of the November issue of Hoard’s Dairyman. This year’s competition drew 105 nominations — the second most to date.

Here are additional responses to the question, “How are cows observed for heat?”

Britannia Dairy, Flandreau, S.D.: Our heat detection system begins the last week of the synchronized program. We find a small percent in heat; however, we found high conception rates in these cows.

We continue to use the system to monitor cows coming into heat after first A.I. service and even after confirmed pregnant to watch for any abortions. This can sometimes save cows, getting them rebred and keeping them in the herd.

Also, if the cow is a low producer, you can cull it out of the herd early rather than waiting until final preg check at predry-off. Overall, our timed A.I. program has a higher conception rate than our standing heats following timed A.I.

Holmesville Dairy, Argyle, Wis.: Our Genex technicians walk through the cows every day while they are in headlocks. We use Reveal tail paint to determine heats. If the tail paint is gone, then the breeder will breed that cow. The heifers are walked daily and bred at outside headlocks. Estrotect patches help us determine heats in virgin heifers.

Kayhart Dairy, Addison, Vt.: Cows are all painted with chalk upon entering the breeding pens. We start detecting heats after the cow receives her first insemination. All breeding pens are walked daily to observe for heats. The time spent in each pen will vary based on the day, but we average about 20 minutes per pen. There are four lactating and one heifer pen that we are walking each day.

When we built the new dairy, we considered putting in an activity system but decided not to for monetary reasons. We also felt like we would have enough to learn with a new facility, let alone having to learn to breed cows using a new method. I feel the activity systems can be used very effectively and am certain we will add a system at some point in the future.

Red Top Jerseys, Chowchilla, Calif.: Heat detection begins when cows enter the breeding pens from the fresh pen at 21 DIM. We begin recording heats at 50 DIM only because we use a small portion of the population as embryo recipients. Everything is tail chalked, and all 11 breeding pens (3,300 cows) are walked and chalked daily. Our double ovsynch first service is our highest conception rate, consistently over 50 percent.

Wenzel Hilltop Dairy, Hilbert, Wis.: Our Genex technician, Eric Riesterer, observes heats and tail paints all of the cows on a daily basis. All first-service cows are bred timed A.I., with heat detection and resynch protocols on multiple services. Only about 15 percent of the breedings are nontimed A.I. The conception rate is 3 to 5 percent lower on these breedings.