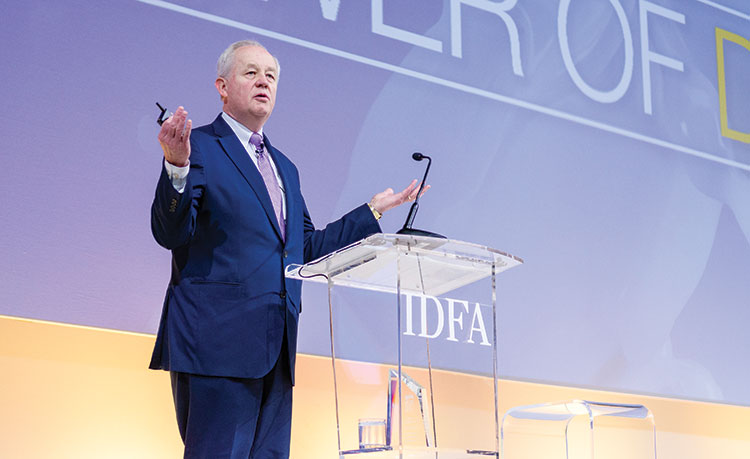 The way we are consuming dairy is changing, explained Michael Dykes, CEO of the International Dairy Foods Association. Since 1975, the nonfluid category that includes cheese and butter is up 75%, while fluid milk has dropped 41%.
Dairy isn’t dying, it’s a growing product category. That was one of the many messages that emanated from this year’s Dairy Forum in Scottsdale, Ariz., where farmers, processors, and retailers gathered to discuss all things dairy.

“The media wants to paint the dairy story . . . with the recent changes we’ve seen in the fluid category . . . that dairy is dying,” said Michael Dykes, the president and CEO of the International Dairy Foods Association (IDFA). “I don’t believe that’s true.”

“If we look at dairy consumption since 1975, we’ve had 22% growth over that time period,” said the CEO in referring to USDA data.

“Why do we have such a hard time convincing the media of this story?” he asked rhetorically, referencing the Dean Foods and Borden bankruptcies. “Most reporters see dairy as a glass of milk to drink. So, if we are drinking less milk, dairy must be dying,” he said of the mindset of journalists who work in the popular press.

“We are consuming our dairy in other ways. We’re eating more of our dairy,” continued Dykes, who cut his teeth in the dairy industry as a veterinarian. In making that statement, he pointed to a chart based on USDA data illustrating that the nonfluid dairy category is up 71% since 1975 and that fluid dairy is down 41% in that same time window.

The consumer,” said Dykes. “I think our industry is coming around to recognizing that the consumer is our boss.

“We all work for the same person . . . whether we are a dairy farmer, dairy processer, or retailer. The consumer is our boss and these guys are changing on us,” said the longtime dairy industry veteran who grew up milking cows on his family’s Kentucky farm.

“We should all feel bullish about dairy. It’s a $60 billion category that’s performing at record levels,” said Jerry Kaminski later in the program.

“Cheese per capita consumption has tripled since 1970 . . . 10 of the 15 categories in dairy are showing year-over-year growth,” explained the chief operating officer for Land O’Lakes.

“You have a product platform that is extremely relevant to retailers. We have a lot going for us. We are fresh. We are nutritious. We have a product that is adaptable to different parts of the day and different lifestyles. It’s great for snacking. It responds to innovation,” Kaminski said.

At one time, whey was a by-product from cheesemaking that had little value. Due to improved technology, whey and the protein it contains has become a major player in the marketplace. It’s hoped that targeted research will improve the economics surrounding ice cream.

“We have appropriated funds of $3 million for USDA Agricultural Research Service to do research on ice cream products that don’t make it into the final product,” said Dykes. “I firmly believe 20 years from now there will be value in that stream . . . much like the whey stream of today.”

“I am very, very bullish about the dairy industry. I love this industry, and I think there still is some great growth, but there are some changes in the industry that we need to be aware of,” said Lino Saputo Jr., the CEO of Saputo Inc.

“To me, the biggest threat we have right now in our industry is misinformation,” he said on a panel showcasing five major dairy executives. “Misinformation about what we have and how good our products are for consumers.

“I hear from so many of my friends and so many different consumers about the next greatest documentary on Netflix that is providing wrong information to consumers,” he said in sharing personal observations. “Unfortunately, they take that information as scientific knowledge and make their decisions based on that.

“What are we doing as an industry to combat that misinformation?” he asked.

“That’s where the leaders of the industry have to stand up and start taking action,” he said with strong passion in his voice.

“So, what are we doing as an industry to convert those others who are receiving misinformation?” he asked about bringing consumers back to dairy.

Dykes had touched on the issue earlier at the event when talking about politics.

“Most of our food is produced in the ‘Red America’ and consumed in the ‘Blue America.’

“We have a tremendous educational opportunity ahead of us. We cannot assume that the folks consuming our foods know what we do on our farms, in our processing plants, and in our retail institutions. We have to educate them. That will take the efforts of all of us,” said Dykes.

While trade wars have been making major headlines this past year, there has been positive movement on trade as of late. That includes updated trade agreements with four of America’s top five dairy trading partners — Mexico, Canada, China, and Japan.

“China has the potential to be a $23 billion market for U.S. dairy in 10 years if we get the relationships right,” explained Dykes. If that came to fruition, China would surpass Mexico as the top U.S. dairy market. In 2018, Mexico accounted for $1.4 billion in U.S. dairy imports.

On the trade front, attendees were reminded that dairy isn’t an easy topic to negotiate.

“Dairy was one of the most technical discussions when it came to negotiating the USMCA agreement (United States-Mexico-Canada Agreement),” said Ambassador Gregory Doud, who serves as the Chief Agricultural Negotiator for the Office of the United States Trade Representative (USTR).

The same situation also prevailed with China. “Have your read the 86-page document on the Phase I agreement with China?” Doud asked the audience. “The largest section involves dairy and dairy trade,” he went on to say.

During the 33 rounds of trade negotiations, USTR negotiators actually had their Chinese counterparts taste fairlife milk to break through the communication barrier.

“They agreed it was a good product,” said Doud. “We pointed out that China’s rules don’t allow us to sell ultrafiltered milk in China.”

In general, technology often becomes a sticking point in trade negotiations. However, Doud stood firm in its importance not only in dairy, but all of American agriculture.

“I will not apologize for American farmers’ use of technology,” he said of the future. “It’s a most frustrating issue when talking with trade negotiators from the European Union.”

“The United Kingdom (U.K.) was one of the few European Union (EU) countries that stood up for science,” added Frédéric Seppey who represents Canada on trade negotiations. “We will miss that once the U.K. leaves the EU,” said the Agriculture and Agri-Food Canada official.

That commonsense approach also involved geographical indications (GIs). In the U.S., we may know the matter more as the effort to preserve common cheese names. The EU has staked their trading future on the matter by identifying GIs as a top three trade issue.

“While the U.K. has 88 GIs, the rest of Europe has over 3,000 GIs,” said Ceri Morgan, a high-ranking U.K. trade representative. “The U.S. and the U.K. have common interest on the topic,” she said in discussing a post-Brexit world in which the UK no longer belongs to the EU.

When it comes to trade, American trade negotiators have a tall task before them. That task is partially hindered by people power.