We know more about feeding calves 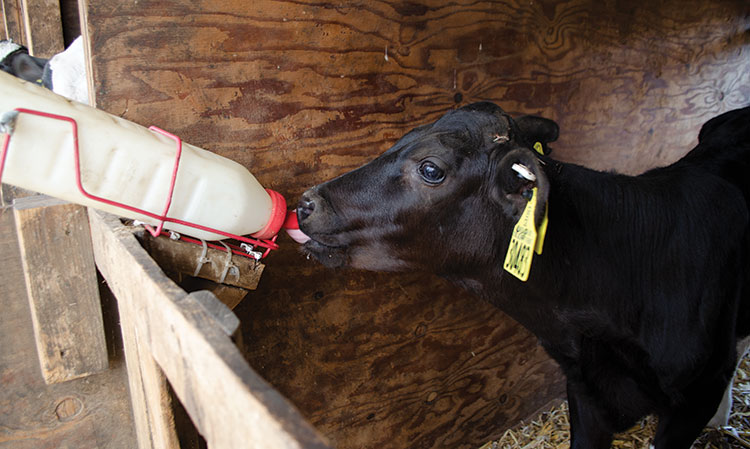 feeding transition milk for three days after colostrum feeding can improve growth rates during the preweaning period.
The 2019 American Dairy Science Association (ADSA) Annual Meeting was held in Cincinnati, Ohio, in June. Over 1,800 attendees from more than 60 countries participated. Four abstracts related to calves and heifers have been selected to briefly review. The trend continues for many more such abstracts annually from the U.S. and other countries, too.

Summary: Offering drinking water from birth increased species richness in the gut of neonate dairy heifer calves. Last year, researchers from Iowa State University did a study in which they fed water either beginning at birth or waiting until 17 days of age — what typically occurs on farms, according to the 2014 National Animal Health Monitoring System (NAHMS) study. They found neutral detergent fiber (NDF) and acid detergent fiber (ADF) digestibility of early water-fed calves was greater than later water-fed calves on day 69 and 70.

In a study presented this year, they looked at the impact of offering drinking water from birth on species richness and the abundance of bacterial communities in fecal microbiome of dairy calves.

Thirty newborn Holstein heifer calves were randomly assigned to receive either water at birth or withheld from water until 17 days of age. They were all fed pasteurized milk and weaned at 6 weeks of age. Fresh feces were collected directly from the rectum at 2, 6, and 10 weeks of age.

At 2 weeks of age, calves fed water from birth had a greater number of observed species and species richness than calves not fed water until 17 days of age. The number of species and the Chao1 index increased over time and became similar between the two water-fed treatments at 10 weeks of age.

Offering drinking water from birth was related to greater species richness in the gut of neonate calves. Higher abundance of some beneficial bacteria could partly contribute to the improved performance of calves fed water beginning at birth.

Take-home message: Feed water beginning right after birth to maximize benefits to calves rather than waiting until 17 days of age.

Summary: The optimal amount of hay or other high-fiber ingredients in the diet of young calves is not well defined. This trial evaluated the effects of feeding 0%, 5%, or 10% chopped hay (6.5% crude protein or CP, 64.6% NDF) blended into a dry total mixed ration (TMR) to Holstein steer calves at 2 to 4 months of age. A textured, high starch starter (20.5% CP, 38.4% starch) was also provided.

Take-home message: Feeding 5% chopped hay supported optimal digestion and growth in calves 2 to 4 months of age, which agrees with previously published research. Manage the month postweaning as a transition month and limit forage to avoid gut fill and reduced intake and daily gain.

Include hay at the right time

Summary: The effects of feeding more grass hay (GH) to weaned dairy calves and its impact on growth and metabolism was measured in the study highlighted here. Three TMRs were fed with increasing GH inclusion of 10%, 17.5%, or 25% on a dry matter basis.

Plasma-hydroxybutyrate tended to drop as GH provision grew. There were no differences in dry matter or starch digestibility, but NDF and ADF digestibility increased linearly with greater GH feeding rates.

Take-home message: Levels of grass hay greater than 10% may reduce intake and growth before 16 weeks of age. Too much forage too soon can limit intake and performance.

Summary: Transition milk (TM, defined as milk from the second through fourth milkings after calving) supplies additional fat, protein, and immunoglobulins to the calf compared with those that receive traditional milk replacer. This study was completed to determine if feeding TM on Days 2 through 4 of life improved growth rate and overall health of calves.

Starting on Day 1 of life, Holstein heifer calves on a commercial Michigan dairy farm were fed one of three diets (35 calves per diet): milk replacer (MR), transition milk (TM), and a 1:1 by weight mix of milk replacer and colostrum replacer. Transition milk was harvested from Holstein cows on the farm, pooled, and pasteurized at 161°F for 15 seconds. Nutrient composition of TM was 3.79% fat, 6.10% protein, and 14% solids. MR and MR+CR were administered at 14% and 15% solids, respectively.

All calves received colostrum replacer for the first two feedings after birth. Subsequently, calves were fed 2 quarts of MR, TM, or MR+CR three times per day for three days. After treatments were complete at 4 days of age, calves were fed and managed similarly. Measurements and samples were collected through weaning at 56 days of age.

All but one calf achieved successful passive transfer of immunity with serum IgG values over 10 mg/mL. Daily weight gain for the first 3 weeks of life was 0.90, 1.08, and 0.99 pound per day for MR, TM, and MR+CR groups, respectively. From birth through weaning, calves fed TM and MR+CR tended to gain 5.5 pounds more total weight than those fed MR (75.5, 74.6, and 69.6 pounds, respectively). Health scores did not differ among treatments.

Take-home message: Feeding transition milk for three days after colostrum feedings improved growth rates of calves throughout the preweaning period and produced similar effects on growth and health as milk replacer supplemented with colostrum replacer. It is time to reconsider how to best feed calves transition milk.