Palatability, content, and texture all matter in calf starter formulation.

By A.F. Kertz
The author is the principal in ANDHIL LLC. 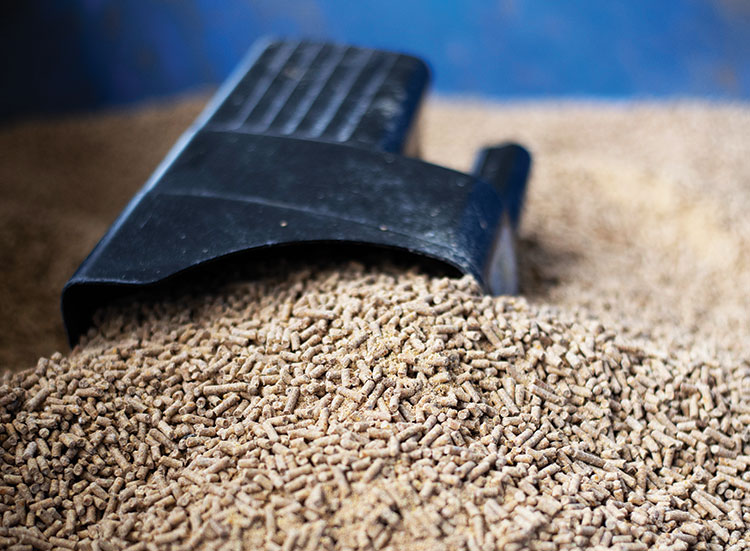 A good and well-formulated starter can get young calves off on the right foot and prepare them for future forage intake.

The preweaning period is an especially important part of a calf’s life as it sets the animal up for success. What makes up the starter, how it is fed, and what is its impact should all be considered when selecting a feed. Let’s look at some key product formulation challenges often encountered on farm.

Palatability. Calves have a keen taste. They can pick out components in a starter if they do not like them. If they don’t like what they taste in a pellet or textured starter, they will reduce feed intake. At a young age, calves can select portions they like or dislike just like goats can. Least cost formulating starters create opportunities for significant ingredient changes and variable intake.

Extreme care is needed when selecting ingredients for a calf starter. Formulation changes should be small and spread out over time. Calves prefer soybean meal over other protein meals. They can adjust to cottonseed or canola meal, but during changeover, intake may decrease and be variable.

Calves do not like fish meal, blood meal, and even distillers or corn gluten feed or meal. Corn and oats must be clean and without mold or mycotoxins.

Pellet quality. This is critical no matter whether the pellet is in a texturized starter or in an all-pelleted starter. Calves do not like fines, and feeds that include fines limit consumption — up to 11% in one study. The best ingredient for pellet quality is wheat middlings. Unfortunately, it has a bad reputation as a “filler,” but if the protein, fiber, and starch levels are known and properly assayed, it is an excellent ingredient.

On the other hand, high-protein starters have less room to use wheat middlings because too much protein meal is needed. One option for opening up space in the starter is lowering the protein to no more than 18% as-fed, which is about 20% on a dry matter (DM) basis. Use more middlings, and the calf will metabolically waste less protein. Feed cost will be lowered, too.

I find it inconsistent that while we rightfully work to lower protein levels in cow rations to reduce protein or nitrogen losses into the environment, we are fixated on using higher protein levels in calf starters. The 2001 NRC Young Calf Model does not call for more than 18% crude protein (CP) on a DM basis if you have reasonable starter intakes. If intake is too low, then higher protein is not the solution — more intake is needed as energy is the limiting factor.

Results were similar among treatments, but steam flaked had some poorer results as seen in other studies, too. This can possibly be because steam flaking can vary widely. Additionally, highly flaked corn can be too fermentable and can crumble more easily, resulting in fines. Cracking is generally okay, if it results in about four to six particles per kernel and fines are screened. Flinty corn can complicate this process as it can sometimes appear in feces. In a Chinese study, we found a significant drop in digestibility measured by two different methods when using flinty corn.

Oats or barley. Neither is necessary in a texturized starter. If used, there is no need or value in processing the oats — let the calf do it.

Barley can be problematic, especially if it’s left unprocessed, as it can largely go through the calf intact. I think this is because of its rounder shape and lighter density based on my field observations where I often find it in the feces. But because barley has highly fermentable starch, it should be processed minimally, such as only rolling or cracking.

Proportion of particles to pellet in texturized starters. This is not an exact science because particle size has not often been measured. I recommend a minimum of about 40% to 45% particles, dependent on sizes of particles, and the pellet should be about 45% to 55% of total formula.

Molasses may be 3% to 5%, but molasses physical properties vary greatly, and it is not absolutely necessary to include it. Molasses may be too sticky at times, especially with greater humidity, but too dry if humidity is low. It can also become moldy, but the accumulation of fines or dust can minimize that issue.

Winter can make the starter blocky. And in the summer, it can become a fly attractant as we saw in the Chinese experiment. Be aware of all these changing factors when working with your nutritionist.

Starch or fiber levels. Pelleted starters can have 35% to 40% starch, which without some roughage will lead to marginal ruminal acidosis. If starch is reduced and fiber raised in a pelleted starter, then ruminal acidosis may not occur — but rumen papillae will likely not develop as well either.

Texturized starters can have 35% to 40% starch without issues because particle size leads to chewing and salivation, which helps maintain more normal ruminal pH for young calves. Remember, ruminal papillae are stimulated to develop by volatile fatty acids (VFAs) in the order of butyric, propionic, and acetic last.

Fat sources and addition. Generally, added fat in a starter reduces intake and gain. Calves have low (~5.5) rumen pH — I think due to lack of a protozoal population. Unsaturated fatty acids kill rumen protozoa, such as in sheep and cow studies and should be avoided for calf starters. Also, avoid distillers, soybeans, cottonseed, and other significant fat source ingredients.

Pelleted versus texturized. The main principle here is that the nature or VFA pattern of rumen fermentation in a young calf determines how well the rumen develops. A well-texturized starter facilitates rumination earlier, and more often than the same formula, all pelleted.

Pelleted starters result in lower calf rumen pH and marginal acidosis. That requires some roughage addition to compensate, which will likely result in greater gut fill, confounding the measure of real body growth. From a practical approach, how many dairy or calf operations can effectively and consistently buy, store, process, and add some roughage to feed with a pelleted starter?

A Canadian study fed what was called a “texturized” starter with starter alone or along with chopped orchardgrass hay. The commercial starter was processed and had “14% flatted barley, 13% flatted oats, and 10% steamed corn.” That totals only 37% texture, whereas I recommend a more textured mix.

From that study, the first issue was low rumen pH with the “texturized” starter fed alone shows there was not enough texture. Astonishingly, calves that also had access to hay had 10.4 pounds more rumen fill.

Since calves on both treatments weighed the same, that means the calves with hay access gained 10.4 pounds less true body growth. This study illustrates the need for enough and proper texture in a starter.

Calves, like babies, crave consistency. That not only applies to the milk or milk replacer program, but also to the starter and its feeding program. Starter formulations should be fairly consistent with minimal ingredient and nutrient content changes. Texturized starters are “safer” for ruminal function, especially if inadvertently overfed. They also provide a better platform for introduction of forage into calf feeding programs.

There are new guidelines for feeding calves
By A.F. Kertz