THE MILK FUTURES ROLLER COASTER continued in early January, with an $18 average for February to December Class III contracts at the close of the first week of trading in the new year. That was up nearly $1 compared to CME trading activity prior to Christmas.

NEAR-TERM CLASS III CONTRACTS showed the greatest gains, with February, March, and April holding a $19 per hundredweight average. Meanwhile, Class IV contracts for the February to December 2021 window netted $15.90, up 20 cents since preholiday trading. Unlike Class III, the highest Class IV contracts were found late into 2021.

USDA’S $1.5 BILLION IN FUNDING for another round of Farmers to Families Food Box program helped propel Class III cheese markets. Announced on January 4, the federal aid package also included $400 million for a dairy donation program and $470 million to “plus-up” on the Dairy Margin Coverage (DMC) program through 2023. Turn to page 82 to read more.

DECEMBER PRICES FELL SHARPLY, with Class III at $15.72, down $7.62 from November. At $13.36, Class IV held steady and eased the spread between the two price stalwarts that generated negative producer price differentials (PPDs) throughout most of the second half of 2020.

PROTEIN PRICES WERE OFF SIGNIFICANTLY, with milk checks at $3.03 per pound compared to $5.62 in November. Butterfat drew $1.54 per pound, off just one penny from November’s pay prices to dairy farmers.

TWO OF THE THREE FEED PRICE PILLARS in USDA’s milk-feed ratio have climbed sharply in recent months. Strong demand for soybeans pushed prices into the $13.50 territory, with corn nudging closer to the $5-per-bushel range. That compares to $9.60 and $10.30 soybeans in October and November, respectively. Corn, meanwhile, hovered between $3.60 and $3.80 during that same time frame.

ALFALFA HAY HAS HELD STEADY with a $167 per ton figure in USDA’s latest Agricultural Prices. That number barely budged between November 2019 and October 2020, as all prices were within a $5 window.

DESPITE UPWARD MOVEMENT OF FEED INPUTS, the net returns on producing milk have induced less culling of the dairy herd. Through November 2020, 26,700 fewer cows had been culled compared to last year.

U.S. DAIRY EXPORTS CONTRACTED 5.5% on a value basis in November when compared to the same time last year. This downturn ended a 14-month run where international dairy sales had posted gains. While many categories were off, whey sales rose 27%. The U.S. remains on pace for double-digit growth in the 2020 calendar year.

AS NEW ZEALAND RAMPS UP its milk production, Global Dairy Trade posted positive gains in its fourth consecutive trading session dating back to November 17, 2020. Both skim and whole milk powders reached their highest levels in over a year, and that helped to boost U.S. prices, too.

THE NEW DIETARY GUIDELINES FOR AMERICANS were rolled out on December 29. Dairy remains a pillar with a recommended three servings a day for adults. The guidelines, while overwhelmingly positive for dairy, fall short by not recognizing new science on dairy fats. For a more in-depth discussion, turn to pages 51 and 56 in this issue.

THE SAFETY OF THE U.S. MILK SUPPLY once again was confirmed by FDA’s testing plan, which determined that only 0.001% of pickup tanker milk loads tested positive for antibiotics — 334 out of 3.5 million samples. 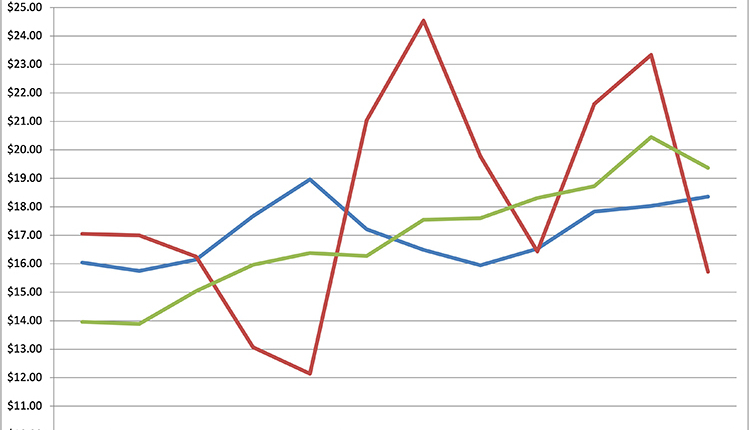