Dairy exports power through the pandemic

Despite friction points including shipping port congestion, the rising value of the U.S. dollar, and inflation, dairy products exports posted a new record in 2021.

The author is the managing editor of Hoard’s Dairyman. 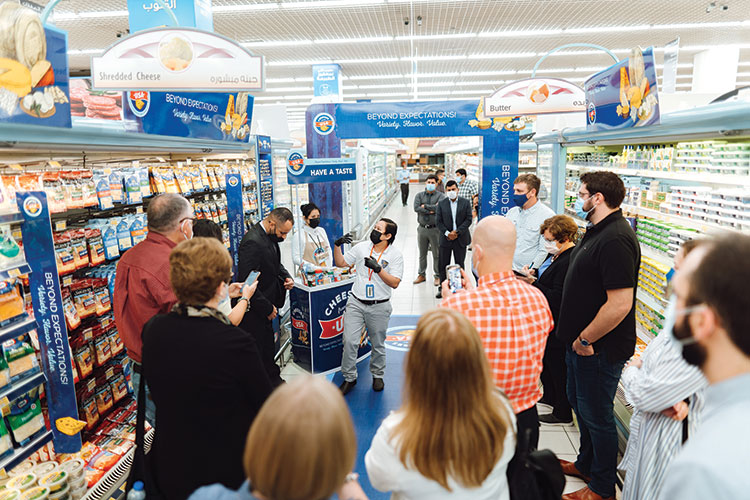 In developing a partnership with stores such as LuLu hypermarkets, USDEC has staff working in concert with stores to ensure proper product placement. Also, in-store promoters help showcase U.S. cheese. Before working in-store, the promoters learn about cheesemaking, cheese varieties, sampling and selling, as well as how aging affects taste, color, and texture.

The United States has come a long way since the U.S. Dairy Export Council (USDEC) was formed in 1995. Back in those days, a minuscule 1% to 2% of U.S. milk production was exported to other countries in the form of dairy products. And those shipments were largely due to government-funded food donation programs.

Everything began to evolve in the ensuing years as USDEC staff started gathering grassroots support, in a precompetitive manner, to develop opportunities for U.S. dairy product sales outside the country’s borders. The seed money and vision for USDEC came from the farmer-funded dairy checkoff and its nationally known Dairy Management Inc. (DMI) organization, which, to this day, is the umbrella organization for USDEC.

With that firm foundation, cooperatives, processors, and traders alike began joining USDEC. As part of the budding relationship, USDEC staff helped all involved to work through marketing, and perhaps more importantly, regulatory hurdles on a country-by-country and region-by-region basis. Through it all, it’s still the responsibility of staff from cooperatives, processors, and traders alike to complete international business deals.

Fast-forward 27 years later — USDEC membership has blossomed to some 110 organizations with thousands of people working on behalf of the collective U.S. dairy industry each and every day throughout the world. Sales now account for 17% to 18% of U.S. milk production, and that took place as U.S. dairy farms produced more milk with each passing year.

All involved in export channels have learned that relationships matter, and it’s people who buy products from people. This holds especially true for food exports.

Mexico, our neighbors to the south, quickly became America’s top customer during this journey. This was partially fueled by the North American Free Trade Agreement (NAFTA) that went into effect in 1994. It also made geographical sense as the country’s close supply chains lent itself to most easily completing deliveries. Mexico has since gone on to become the first $1 billion dairy market for the U.S.

The fast-changing region known as Southeast Asia has become America’s second $1 billion market. It’s a large area comprised of 16 countries. The expanding middle class of consumers in the likes of Vietnam, Indonesia, and the Philippines have a growing appetite for high-quality dairy proteins. The region has become so important to the U.S. dairy industry that USDEC opened the Center for Dairy Excellence in Singapore to serve as a business hub to connect sellers and buyers.

Then there’s China — the world’s largest dairy product importer and most populous country ranks along with Canada, Japan, South Korea, and the countries of the Middle East and North Africa (MENA) as the top buyers of U.S. dairy products. Outside of Canada, all those countries and regions are markets where USDEC has held farmer-based trade missions since carrying out the first farmer trade mission to Japan in 2011.

These USDEC trade missions give customers in regions around the world a chance to meet the farmers and processors who produce the milk and make the dairy products. When international customers see the efforts made to make connections, it further grows the business relationships and ultimately spurs sales.

U.S. exporters are working harder than ever to deliver products. It hasn’t been easy as many countries retain rather stringent travel requirements. One region that began to open for international business travel is Dubai, a city in the United Arab Emirates (UAE). Given this development, USDEC hosted a farmer trade mission to the region in November.

Dubai is in the Persian Gulf region and is considered by many to be the “business capital” of that part of the world. It’s so important to the area that it was selected as the host city for the first World’s Fair to ever be hosted in the Middle East. These days, the World’s Fair has been rebranded as a World Expo, and last year’s event was called EXPO 2020 after being postponed one year due to the pandemic.

Chef Antonio El Khoury leads the curriculum at the International Centre for Culinary Arts (ICCA). As part of the course’s capstone project, aspiring chefs created a host of entrées featuring U.S. cheese as a core ingredient.
“Dubai is really a trendsetting part of the world; we’re talking about a city that has 12,000 restaurants, 600 hotels, and it reaches people from all over the world — not just the Middle East,” explained Missouri dairyman Alex Peterson, who also serves as chair of the National Dairy Research and Promotion board, which is part of DMI. To be even more candid, Dubai is the best of the East and the West put together when it comes to world culture.

That makes it a perfect location to train future chefs.

“What does authentic Emirati cuisine look like?” Peterson asked the hosts while on the trade mission.

“Our hosts laughed at me because there’s really very few actual people there from the UAE. It’s a cross-section and melting pot of the world. That’s what makes a culinary school there such an incredible opportunity,” continued the University of Missouri graduate of his experiences on the trade mission.

The International Centre for Culinary Arts (ICCA) features the USA Cheese Specialist Certification Program, which USDEC first launched in partnership with the award-winning ICCA program in 2018. There are now seven other partnerships like it around the world.

“Many companies spend great sums of money on marketing budgets. Here, we use education,” said Sunjeh Raja. “It’s the most intensive form of marketing. Our marketing is built through relationships,” said Raja.

“These are the people who will become your ambassadors,” continued the highly regarded culinary specialist whose school routinely ranks among the world’s top 10 culinary institutes.

As part of the recent trade mission, the U.S. dairy farmers held a question-and-answer session with the aspiring chefs. “We sat down with the class of 22 students for over an hour, and we answered their questions about our farms, dairy in general, environmental standards and practices, and a number of other things,” Peterson reported. “They were a highly intelligent group.”

With these 22 newly accredited USA Cheese Specialists, the program will have graduated 478 chefs working in the region in just four years.

A strong partnership developed by USDEC has helped to double cheese sales.

“At the moment, there are 167 natural cheeses from the USA on these dairy shelves out of the 300 natural cheeses,” said Firas Zahreddine in discussing the cheese sold in the LuLu hypermarket that was visited by the farmer delegation. “We have 54% of those shelves represented by USA cheese. This partnership began through our USA Cheese Retail program,” added the marketing specialist with 21 years of work experience.

“We began by trying to understand the issues and the bottlenecks that buyers were facing when it came to stocking American cheeses,” he continued. “We found that there are at least two to three layers between the retailer and the cheese producer. That may have included consolidators, wholesalers, or suppliers that all added to the markup of the cheese,” said Zahreddine, whose rather new position was funded by state and regional dairy checkoff programs known as S&Rs.

“Our Middle East marketing team brainstormed ideas to make this situation better. That’s when we came up with the USA Cheese Retail program,” he explained. “If you buy USA cheese from our (USDEC) members, we will help you reduce the air freight (on a trial basis), educate your staff, educate your shoppers with in-store activities, and we will have merchandisers who will help fix your shelf displays. We will look after all the opportunities and obstacles related to U.S. cheese in your store, and we will be your partners within any vital activity,” continued Zahreddine, who can speak nearly every Middle Eastern language.

The LuLu stores quickly jumped on board after learning of the USA Cheese Retail program.

“Since we started working with LuLu in 2018, we expanded the stock keeping units (SKUs) for USA cheeses from 90 to over 300 between both the dairy case and deli shop,” he said of the effort. “We also increased sales from 60 to 120 metric tons. That equates to $1 million increase in purchases of USA cheese.”

Shoppers can find products thanks to a “Cheese made in the USA” seal marked on all American cheeses. That simple display helps customers halfway across the world know that they are able to purchase a quality item from quality milk produced in the U.S.

“I think it’s really important when people are walking through the supermarkets that they see this product is coming from the U.S.,” said DMI Chairwoman Marilyn Hershey, who was another member of the farmer trade mission. “I think other countries and other areas of the world do a good job with that, and we really had to step it up and showcase U.S. cheeses to make sure that people know that the quality product they’re getting is from the United States,” said Hershey, who is a Pennsylvania dairy farmer.

“We have a lot to offer,” added Becky Levzow, a Wisconsin dairy woman and member of the DMI board of directors, who was also on the trade mission. As she talked to customers in the region, time and time again they were surprised to learn that the U.S. produced more than 1,000 types of cheeses and that the U.S. is the largest single-country producer of cheese made from cows’ milk.

In addition to these activities, the farmer trade mission and USDEC staff went to the U.S. Consulate earlier in the trip. It’s here that the unsung heroes — USDA’s Foreign Agricultural Service staff — reside. As members of the State Department, these public servants build ties within the country and help work through regulations that might impede trade. Well-versed in all things agricultural, Valerie Brown and Lucas Blaustein shared their insight with the group.

“We have consistently grown U.S. dairy product imports during COVID-19,” said Blaustein of the MENA region that imports 90% of its food. “During COVID-19, these areas invested heavily into home delivery.”

“Cheese is big here,” added Brown. “Cheese is a staple of cuisine here, and the food is trending more Western.”

“I thought it was really important that they knew we were there and cared enough to take off the time and make the effort to travel here,” said Texas dairyman Larry Hancock, who chairs the USDEC board of directors of the consulate staff. “It showed that we were committed to exporting and that we supported the USDEC staff that was in-country.”

Midway through the trade mission, the U.S. Consulate was pivotal in partnering with USDEC staff to host an expanded gathering of dairy ingredients importers, distributors, and processors.

During the preparation, the farmers discussed their farms and U.S. dairy farming with the hosts while answering their questions. The finished videos were posted for followers to hear those stories and have the ability to try the dairy-based recipes for themselves.

“This was key to the whole experience of that afternoon because we could tell the story ourselves,” Levzow said. “So many times, I think things get lost on social media. This was a real story from the real people that do it.”

And, with that, everyone was once again reminded that relationships matter, and it’s people who buy products from people.

The randomness of reproduction
Reproduction E-Source
Related to:
features, exports
In Features