What works best for cows milked with robots

The author is a professor at the University of Guelph. 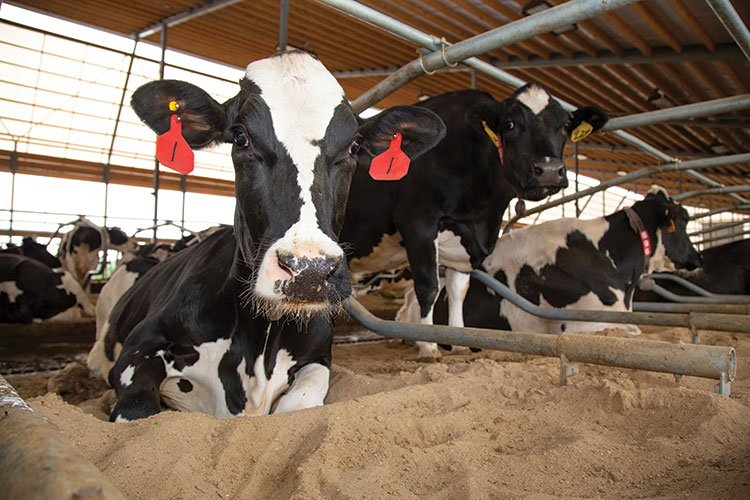 Good access at the feedbunk and frequent pushups paid dividends in barns where cows are milked with automated milking systems.

With tight labor markets and constantly improving technology, there has been an exponential adoption of automated milking systems (AMS) throughout North America. Milking with AMS, particularly single-box systems, has revolutionized the way we are able to manage and milk dairy cows.

In previous research, we have demonstrated that the primary cited benefits of AMS adoption for dairy producers include reduced stress, lessened labor requirements, and greater time flexibility. These benefits are helping smaller farms and farms wishing to expand remain competitive without an excessive addition of labor. We are also seeing more large farms adopting what many in our industry simply call robots, mainly in an effort to combat both mounting labor costs and the mere shortage of available laborers.

From a cow perspective, AMS may allow cows more freedom to control how they spend time performing various behaviors. This may translate into greater health and production, which is something that producers who have adopted AMS have reported.

While these benefits related to adoption of AMS are possible, they might not always be realized on-farm. Several impediments to success in AMS farms may exist, often related to situations where cows are not milking voluntarily and, thus, frequently enough. While diet, both that fed at the bunk and in the AMS unit, can play a large role in that voluntary milking and resultant production, other factors can also play significant roles.

We recently explored which housing and management factors were associated with greater milk yield and quality in a benchmarking study of 197 AMS farms from across Canada. Not surprisingly, some of the primary factors identified were consistent with those previously observed on farms with conventional milking. These factors were mostly related to ensuring good feed access along with maintaining a comfortable and clean housing environment.

Regarding feed availability, in our study, those AMS farms with greater milk yield per cow per day pushed up their feed more often and had greater amounts of feedbunk space per cow. Herds pushed up feed, on average, 12.8 times per day, with a range of 0 to 32 times.

Across that range, each additional five feed pushups per day was associated with +0.77 pounds per day per cow greater milk yield. This result complements a study of AMS farms in the U.S. Midwest in which those farms using robotic feed pushers produced 10.8 pounds per day more milk per cow than farms where feed was pushed up manually with a human-operated machine. Of our Canadian study herds, 71.1% of the farms used a robotic feed pusher. ­Those farms pushed feed, on average, 16.8 times per day, while those that pushed up feed manually did so 4.4 times per day.

Thus, it is likely that the results observed in both studies were driven by the frequency that the feed was pushed up within each farm rather than by the method of pushing feed itself. That being said, employment of robotic technology does, in many cases, ensure the task needed to be done is actually completed, both frequently enough and in a consistent manner.

Interestingly, in two previous studies, we demonstrated that greater feed push up frequency in AMS farms was associated with greater lying duration in cows. We have also previously demonstrated that the timing of milking in AMS is often linked to the timing of partial mixed ration (PMR) consumption at the feedbunk, as influenced by PMR delivery and push up. Thus, in AMS, by delivering and pushing up PMR more often, we are not only ensuring that cows can use their time efficiently and maximize lying duration, but also promote more PMR feeding events, which may translate into greater milking frequency and yield.

Some have argued that, given the fact cows in AMS barns do not necessarily all stick to the same time schedule, we can get away with less feeding space. Our study results contradict that thought, as this was the second time in research we have observed a positive association between feedbunk space and average milk yield per cow in AMS farms.

Similar to pushing up feed more often, providing more bunk space will minimize the risk that cows spend excess time on their feet waiting for feed access. A further analysis of 75 farms in our dataset from Ontario, Canada, supports this result. We demonstrated that for each 4-inch gain in feedbunk space per cow, there was an associated 1.7 percentage point drop in clinical lameness prevalence. That clinical lameness, measured as any impairment to cow gait or a moderate limp, averaged 28% prevalence at a herd level, ranging from 10% to 67%.

In a previous AMS study, we demonstrated that lying time was positively associated with greater space at the feedbunk. Thus, the negative association reported in the present study between feedbunk space per cow and clinical lameness prevalence may be the result of cows with more feedbunk space spending less time standing idle . . . aside from waiting to be milked . . . and more time lying down, which may lessen the risk of lameness.

We also previously demonstrated that any gait impairment comes with consequences in AMS. Lame cows have more involuntary milkings, which means someone on the dairy needs to fetch those cows for milking more often. In addition, those fetched cows milk less often per day, and as a result, produce less milk. In support of that premise, in this newer study each 10-percentage point jump in clinical lameness prevalence was associated with 4.4 pounds lower milk yield per day per cow. Overall, these results highlight the importance of adequate bunk space, not only for conventional farms but also for AMS farms.

Sand is the queen of bedding

Housing features related to provision of comfortable and clean environments were also associated with greater milk yield per cow and lower herd-average somatic cell count (SCC). Specifically, those farms using sand bedding (26.4% of farms) produced, on average, 4.6 pounds per day per cow more energy-corrected milk and had 36,744 cells per milliliter lower SCC as compared with those bedding with organic substrates.

The udder health benefits of sand bedding are well-established. Sand bedding is also known to enhance lying duration (when provided in adequately sized and maintained stalls) and help reduce risk of lameness, both of which may help support greater milk yield.

In support of that, in our analysis of the 75 subset farms, we demonstrated that the use of sand was associated with a 9.3-percentage point lower clinical lameness prevalence when compared with those farms using organic bedding. Further, in that analysis, in addition to lower milk yield, each 10-percentage point increase in clinical lameness prevalence was also associated with 23,391 cells per milliliter greater SCC. Thus, these results highlight the importance of using deep-bedded, sand-based stalls to maximize milk yield and quality on AMS farms.

We also demonstrated that other housing aspects related to cow cleanliness were associated with lower SCC. In particular, those farms with higher alley cleaning frequency, as well as greater lying alley width, had lower SCC. Both of those factors would reduce the risk of cows standing and walking in deeper, accumulated manure, and thus will reduce the likelihood of cows becoming dirty.

Given that premilking teat cleaning may not always be as thoroughly done in an AMS as compared to manual cleaning and disinfection, it is recommended that even more attention needs to be placed in AMS barns to promote cow hygiene. This would include maintaining walking alleys and also ensuring clean stalls and milking equipment.

Success in AMS is reliant on many factors. While dietary management on AMS farms plays a substantial role in that success, various housing and management factors are also key. Ensuring good access to feed at the bunk, as well as clean and comfortable lying and standing areas, pays dividends for both the farmer and the cows. These action items will allow cows to optimize eating and resting times, minimize risk of lameness and poor hygiene, and improve voluntary milkings, thus allowing for enhancement of both milk yield and quality on AMS farms.

In our area, robot repair is a one man show
HD Notebook
Related to:
features, robots, robotic milking
In Features

My cows’ teats are cleaner than your hands
By Trevor DeVries, University of Guelph