While stress eating may be something we as humans do, it is clear that for dairy cows, stress does not have the same effect.

The author is a professor at the University of Guelph.

Despite the many advances in dairy cattle nutrition, we are still faced with some challenges. One of those challenges is to ensure adequate dry matter intake (DMI) in transition cows to optimize health and milk production in early lactation, as well as subsequent reproductive success. 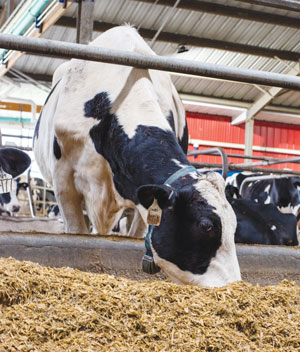 To maintain good health and productivity in transition cows, continued focus must be placed on minimizing exposure to stressors.

There is substantial evidence that DMI, and the subsequent health and production, of dairy cows around calving is associated with fat mobilization, inflammation, and stress. Specifically, both inflammatory conditions and excessive mobilization of body reserves have been shown to be associated with reduced feed intake in early lactation. Furthermore, in the weeks leading up to calving and those thereafter, DMI in cows may be reduced as a result of various stressors.

In addition, with stress comes the production of stress hormones, such as cortisol, which may have direct, negative impacts on immune and reproductive function. Further, chronic stress in dairy cows has been associated with greater risk of chronic, systemic inflammation, which in turn elevates the risk for infectious and metabolic diseases, impaired reproduction, and lower milk production.

While research is still on-going to understand where many of these effects originate, and what drives what, it is clear that maintaining high, consistent DMI through transition is important for minimizing the risk of problems. Furthermore, behavioral and physiological stressors are known to have negative impacts on that DMI. Thus, it is important to recognize common stressors that may impact DMI, behavior, and performance of transition dairy cows. Common stressors that dairy cows may face during transition include:

Heat stress. Hyperthermia may result in heat-stressed dairy cows, evidenced by elevated body temperature and respiration rate. These physiological effects of heat stress have been associated with reduced DMI and subsequent reduced production. The observed reductions in DMI may be related, in part, to the fact that heat-stressed cows will modify their behavior to cope with that stress.

Specifically, and most commonly, heat-stressed cows will have reduced rumination time, as well as number of rumination chews and boluses. That behavioral modification may affect rumen function, and specifically total digestion and passage rate, leading to a slower return to eating and thus reduced DMI.

To mitigate production loss due to heat stress, dairy cows should be provided with effective heat abatement. Cooling of lactating cows has been demonstrated to improve feeding time, rumination time, and DMI. This may lead to greater milk production.

Furthermore, cooling of dry cows is just as important; providing heat abatement for dry cows (throughout the entire dry period) has been associated with greater DMI during the dry period, as well as greater production into the next lactation. Interestingly, these positive effects of cooling dry cows do not only impact the cow itself, but also the future productive potential of its in utero offspring.

Overcrowding. Insufficient access to high-priority resources, including the feedbunk and lying area, due to overcrowding may lead to excessive competition for those resources and greater stress in cows. Insufficient space at the feedbunk results in cows experiencing more displacements from the feedbunk, reduced feeding time, and increased meal size and feeding rates. These effects may lead to reduced intake, suboptimal rumen function, and reduced feed efficiency. Insufficient lying space due to overcrowding results in less daily lying time and greater inactive standing time. These effects may be associated with reduced rumination, particularly while lying.

In connection with that, we recently demonstrated in our research that cows with a lower probability of ruminating while lying down have reduced DMI. Research has collectively demonstrated that reduced stocking density in the close-up period results in greater DMI, increased lying duration, improved markers of immunity, and reduced risk of negative energy balance in early lactation. Thus, minimizing competitive stress in dairy cows by lowering stocking density is of utmost importance in the close-up period, as well as in the immediate postfresh period.

Pen movements. An important, potential stressor of transition cows is the frequency and timing of putting animals into new groups via pen movements. It is well established that every time a cow is moved into a new pen, it can disrupt the social complex of the group and have specific negative impacts on the moved individual.

Research has demonstrated negative effects of regrouping for up to three days following placement into a new pen, including more competition for feed access, greater feeding rate, and reduced rumination time, DMI, and production. Research has also demonstrated that first-lactation cows may be more sensitive to the negative effects of regrouping as compared with multiparous cows, particularly in response to grouping that occurs after calving.

Designing systems to minimize the number of group changes, particularly pre- and post-calving, is important to minimize the potential negative effects. In addition, research has also demonstrated that the stress effects of regrouping may be reduced by limiting stocking density of pens cows are introduced within, as well as introducing pairs of cows into new groups, particularly for primiparous animals.

Group composition. The parity composition of cows within groups is another potential stressor, particularly in the pre- and post-fresh periods. Researchers have demonstrated several behavioral differences of first-calf heifers as compared to mature cows. In particular, first-calf heifers in mixed-parity groups are competitively displaced from the feedbunk more often and have reduced lying time as compared to mature cows in those groups.

Given this situation, there are benefits in keeping first-calf heifers and mature cows in separate groups. Across various studies, it has been demonstrated that first-calf heifers housed separately from mature cows have greater eating time, DMI, production, and they experience lesser body weight loss and fewer ketosis treatments than those kept in groups mixed with mature cows.

Based on these data, it is recommended that first-calf heifers and mature cows are housed separately . . . both prior to calving and in early lactation . . . to ensure optimal health and production of those first-lactation cows. However, due to herd size and facility design constraints, this is not always possible. For those herds that do not, or are not able to, keep separate groups, it is important those co-mingled groups have more than adequate lying, feeding, and water space.

Lameness. In dairy cows, lameness is often the manifestation of pain originating from injury or infection in the hoof. It is generally accepted that lameness is a source of stress and pain in dairy cows. Likely related, lame cows have been demonstrated to exhibit reduced feeding time and DMI.

Lameness in transition cows is especially troubling. Cows that are lame, particularly during the dry period, are at greater risk of developing transition diseases. One risk factor for lameness is low body condition and/or excessive body condition loss. Therefore, lameness during the transition period may not only reduce DMI and raise the risk of health challenges postcalving, but also be resultant of any health challenges that may occur at that time. Therefore, all efforts should be made to mitigate the risk of lameness, including but not limited to: proper hoof care, minimizing excessive inactive standing, and improved nutritional management, particularly through the dry period.