A worthy investment, even from the far West Coast

The author and her husband work in partnership with family on a 450-cow dairy in East Moline, Ill. 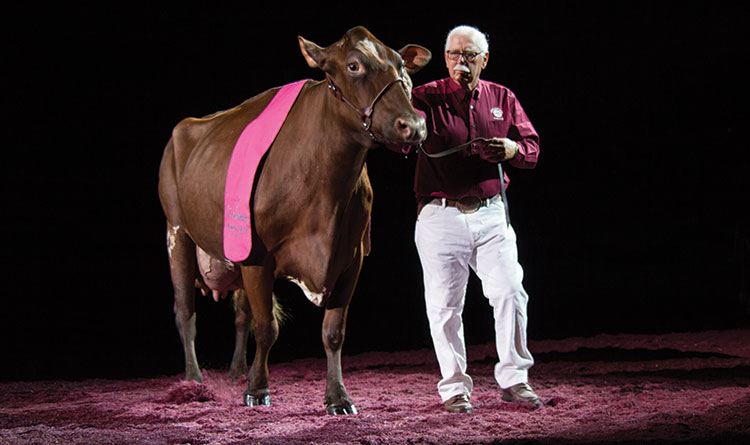 One of the first to make the long haul from California to Expo, Stuart Rowe and his Innisfail herd have certainly reaped the rewards of the lengthy trip in the form of impressive placings and numerous banners.
With thousands of exhibitors and visitors flooding the state of Wisconsin during the first week of October, World Dairy Expo has a far-reaching economic impact in the city of Madison. However, the trip is an investment for both attendees and cattle exhibitors. Two West Coast dairy producers, Stuart and Emily Rowe, Innisfail, Davis, Calif., and Sarah and Bud Yoder, Bradner Farms, Abbotsford, British Columbia, openly discuss the cost to show at Expo and their travels to Madison.

“As a lifelong dairyman and breeder of registered dairy cows, my ultimate goal has always been to exhibit some of our own homebred stock at the finest dairy show in the world, World Dairy Expo,” said Stuart Rowe. “We’re all aware that you never know what the competition will be, but as the father of one of the greatest basketball scorers said to his son, ‘No one’s ever made a shot that they didn’t attempt!’”

So, what does it take to get a cow to the colored shavings of Expo? “First, it depends on the distance you live from Madison,” says Rowe. “Normally, it costs us around $500 to ship individual animals from the West Coast unless we are combining with other breeders and sharing expenses with a large semi load.”

Incidentally, if the transportation includes caring for the entry for the duration of the event, the cost, including transportation, could amount to as much as $2,000 per head. “Take a tour of the parking lots on the grounds at Expo, and you will see an assortment of rigs with license plates from almost every U.S. state and Canadian province.”

Rowe reminisces, telling stories of the first few years when West Coast herds were able to send an entire show string to World Dairy Expo by train for the same cost it takes to send one cow from out west today.

“Our local railroad agent would supply us with a 50-foot automobile hauling railcar and write it on a contract as a 36-foot boxcar; when we returned home with approximately the same number as we started out, they would rebate half the round trip cost,” he said

This generosity stemmed from a long-standing promotional agreement in which the railroad industry supplemented the purebred cattle industry as a thank you for the business derived from shipping massive numbers of cattle by rail to slaughter, primarily to Chicago, the early hub of the packing industry.

The Rowes first arrived at World Dairy Expo in 1968 with their Innisfail herd and were pleased to win the first of many Milking Shorthorn Premier Breeder banners, including as recently as 2015. However, within a few years, the trains ceased to offer this service and were replaced by long-distance semi trucking.

“In a haul of any distance, whether by train, trailer, or gooseneck, there has to be provisions for cattle care en route,” says Rowe. “Actually, the boxcars had it best because their 50-foot ‘home’ carried all their feed and water, milking was done in their stalls, and stalls were mucked out going along the rails, with a bed and grub box up on the deck during the trip for the crew.”

One of Rowe’s most memorable trips came in 2002, when he traveled 2,100 miles with his son, John, to Expo. “Then, at the age of 72, I wasn’t sure I was up to repeat an arduous trek to Madison, but as the time approached and some of the show prospects began to take shape, I, too, got the bug!

“I remember after the very long haul to Expo, having Hank Van Exel tell me that he was impressed with a bull calf that he had hauled ahead for us, saying, ‘If nothing else, I can say I hauled the champion Milking Shorthorn bull,’ a prediction that would later come true,” he noted.

Could not believe it

“At one of our fuel stops in Iowa, we came across a woman from Switzerland who had attended World Dairy Expo and could not believe we hauled cows all the way to Expo from California. She shook her head and said, ‘You’re crazy!’”

In recent years, the Rowes have sent fewer entries to Expo, and they are cared for in other strings at approximately $1,500 per head. “Due to our advancing ages, as well as rising costs for shipping cattle across the country, we will be relying more on exhibitors who own Innisfail Milking Shorthorns to continue our presence at World Dairy Expo,” Rowe said.

Sarah and Bud Yoder have brought a string to Expo for the past eight years and even got engaged at World Dairy Expo in 2012.

“I easily recall that year,” says Sarah Yoder. “We trucked home on a high and found ourselves in the middle of nowhere in Fargo, N.D., when our truck started sputtering. We were close to an exit and were able to chore while we waited for a tow truck. Thankfully, the stockyard was nearby, and despite having 1,200 head of wild horses at the auction that day, they still allowed us to house our cows until our truck got fixed.”

However, the Yoders’ truck had blown an engine and was going to take two weeks to get fixed. Thankfully, through the grapevine, they were able to find a nearby South Dakota dairy that helped out. “They even came and picked up our cows and took them to their farm to care for until our truck was fixed, allowing us to fly home and fly back when our truck was ready,” said Yoder.

“We are forever grateful to that family and feel so blessed to be a part of an industry that takes care of one another. There is no doubt that, on a long trip, you really have to be prepared for anything!” she said.

For the Yoders, 1,750 miles separate Abbotsford, British Columbia, from Madison. “It takes us 43 hours and three to four stops,” says Yoder. “With a good team, chores get done quickly; one milks, one cleans out the trailer, re-beds, fills up water bowls, and puts down hay.”

The weather the past few years coming home from Expo has been good for the Yoders, although they say their biggest problem is dealing with a trailer that freezes up inside. “Most people have their water shut off; we don’t, so sometimes it’s not so fun,” she explained.

Sarah and Bud count on getting water from gas station hookups, but say that sometimes they are shut off, so they have to keep driving until they find one that is open or pull into a farm.

“The welcome we have received from farms has been overwhelming,” said Yoder. “Without hesitation, most farmers tell us to unload the cattle and run them through their parlor. They even give us a hot meal when all we kindly asked for was a hookup for our hose.

“Once we get home from the long three weeks of travel and show, we are simply exhausted, and the question of why we do this does run through our minds. But, honestly, we love showing at World Dairy Expo, and the long adventurous trips add to the memories,” she said.

The Rowes wholeheartedly agree, explaining, “Nothing compares to the excitement of watching homebred favorites parade around the ring at World Dairy Expo! As soon as the show is over, you are already thinking about the following year.”

On a normal year, when the Yoders don’t have to put a new engine in a truck, they budget $20,000 to $25,000 for basic travel, feed, labor, and lodging expense for the trip to Madison. The breakdown includes: