By Dennis Halladay, Western Editor
For decades, the relationship between milk producer groups and the International Dairy Foods Association (IDFA), which represents milk processors, was tenuous at best. Relations soured even more when the Dairy Market Stabilization Program was proposed for the recently failed farm bill and have gone downhill ever since.

Higher producer prices would also probably cut into processor profit margins, but I have yet to see IDFA say anything about that. 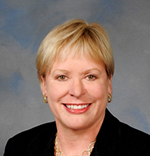 Whether intended or not, a recent attack of the program by IDFA president and CEO Connie Tipton (pictured here) only makes things worse. It also reconfirms the belief by many producers that IDFA has zero interest in working with them to find a compromise that both sides can live with.

A guest column written by Tipton in the August 25, 2013, edition of The Oakland Press is what did it. Its headline was: "U.S. Senate's plan to increase milk prices won't be good for anyone."

Whatever her message was meant to say, it was obscured by the headline – a headline that said dairy producers are nobodies.

I am one biased farmer
HD Notebook
Related to:
HDN, farm bill
In HD Notebook