No one else comes close to making as much milk per capita.

By Dennis Halladay, Western Editor
Twenty-seven U.S. states border either the Pacific Ocean, Atlantic Ocean, or Gulf of Mexico. This makes them candidates to be international dairy product exporters via low-cost sea shipping.

But in terms of yearly milk production, only four are top 10 dairy states (California, New York, Texas and Washington) that have sufficiently high milk production volume to make them likely exporters.

Of those, California and Washington are already there. New York has more than 100 dairy processing plants, but their output is almost entirely used by New York residents. Texas, meanwhile, produces significantly less milk than its population consumes.

When looking at the list of largest dairy states, pounds of milk produced per resident clearly shows which one badly needs to become a major dairy exporter even though it doesn't have ocean access: Idaho. 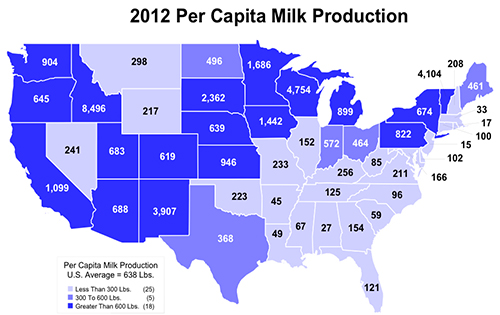 The nation's third largest dairy state makes more milk per capita than any state in the country, and by a huge margin. In fact, it makes so much more that it HAS to become an international exporter.

Nationally, the average U.S. resident in 2012 consumed 638 pounds of dairy products on a milk equivalent basis.

That's great for dairy producers in the Southeast, where production per capita totals were far below that. But things are wildly different in Idaho, where average production was a staggering 8,496 pounds per capita. And that number is growing, because Idaho's population isn't rising as fast as its cow numbers are.

On paper, the future appears to point to current and new dairy product manufacturers building plants that make products configured specifically for international buyers, which are first shipped by rail to ports in Portland, Seattle or San Francisco and then shipped to voracious markets in Southeast Asia.