Is extra margin protection worth it?

The size of your herd has a lot to do with the answer. 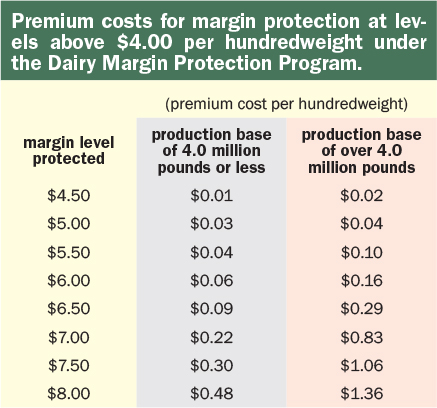 Sometime in the next two weeks or so – the deadline is September 1 – the U.S. Department of Agriculture will issue final details about how the 2014 Farm Bill's voluntary Dairy Margin Protection Program (DMPP) will work.

At that point every dairy producer in the country will have two big decisions to make in as little as 30 days: Should I sign up? And should I buy extra coverage above the $4 per hundredweight level that goes with signing up?

In my opinion the answer to the first question is easy: Yes. Signup cost is just $100 per year and it guarantees producers will receive at least $4 per hundredweight from all sources above a USDA-computed feed ration index price if there is a catastrophic milk price decline or catastrophic feed price spike.

That amount will never be enough to make a profit, and it might (or it might not) stave off bankruptcy only temporarily, but for $100 it is potentially too much bang for the buck to pass up.

Question number two is infinitely more complex, because the answer depends upon the unique past, present and future circumstances of each dairy. It also depends on where it is located and how big the herd is.

As the accompanying table from USDA shows, the cutoff between "small" and "big" is 4.0 million pounds of milk per year – which, frankly, isn't a lot. At current national average production per cow, it works out to about 187 head.

A look at premium rates for each coverage level above $4 also clearly shows two things: Good premium value ends at the $6.50 level, and big herds are being treated like ugly stepchildren.

Big herds will pay higher premiums at every coverage level, and nearly four times more at $7 – which apparently is USDA's way of saying, "Don't even think about it." (Raising margin protection from $6.50 to $7, a 50-cent increase costs 54 cents!)

For small herds, the $6.50 level probably deserves consideration. For big herds, anything over $5.50 seems pretty pricey.

But dairy owners of every size also need to very candidly ask themselves a very "big picture" question: If national margins collapse down to $4 or even $6, how much good is a modest check from USDA going to do?