Fueling up with chocolate milk

Practicing healthy habits at an early age can influence one's lifestyle for years to come. 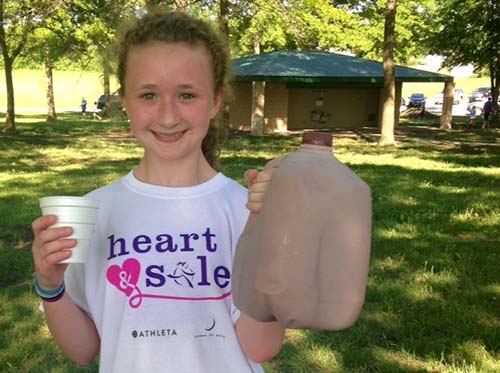 Stretching out sore, tired muscles after an evening of training for your next 5K race is something most runners do regularly. But would you know to do that when you are only 12 years old?

It's safe to say that I was not the athlete of my family. I much preferred to watch sports rather than play them. I was relatively fit, however, and I knew that exercising and nutritious eating habits were still an essential part of a healthy lifestyle. Now that I am an adult, I try to push myself to run (emphasis on the word "try") and eat as well as I can as a college student. But when I was 12 years old, I certainly did not set the goal to run my first 5K race like my younger sister, Sophie, did.

As part of a school program, Sophie decided that she wanted to start training for her first 5K, and she has been gearing up for the big run that is set for mid-May. Along with training, Sophie has been drinking chocolate milk to help her build muscle and stay in shape.

The protein found in chocolate milk has been shown to help athletes build and repair muscle after periods of exercise, and the calcium helps to ensure strong bones and teeth. This combination makes milk one of the elite beverages to enjoy after a workout.

As race day gets closer and closer, Sophie has been testing out the benefits of chocolate milk. She has not only been enjoying the results, but the taste of the chocolatey treat as well. After completing her first practice 5K, Sophie, along with her classmates, guzzled down some ice-cold chocolate milk along with some other healthy snacks.

Taylor Leach grew up on her family's dairy farm in Linwood, Kansas. Leach graduated with an associate's degree from Kansas City Kansas Community College and now attends Oklahoma State University, majoring in animal science and agriculture communications. On campus, she is a member of the dairy club and also works on the university's dairy farm. Leach will be serving as the 2016 Hoard's Dairyman summer editorial intern.