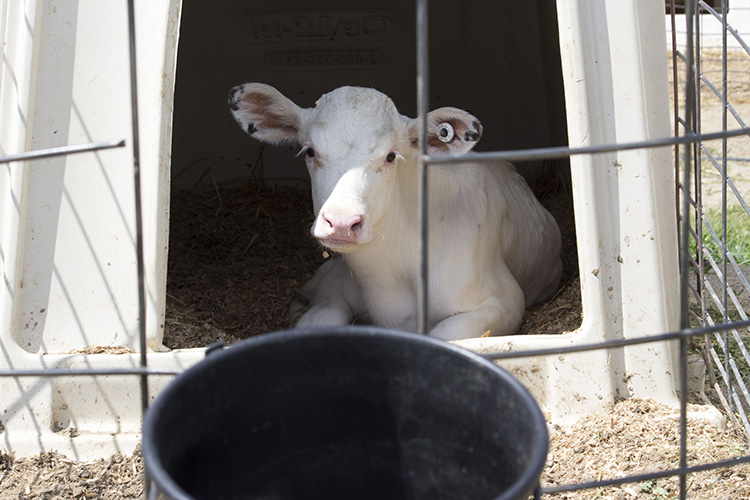 Imagine you are walking through the calf barn and you notice a calf that is not acting quite right. How severe is the illness? And perhaps a more difficult question to answer, how long has this being going on?

Having a proper protocol for identifying sick calves can both reduce the number of calves with a severe illness and limit the spread of disease to other calves. Maybe the calf was sick last night, but still drank its bottle. In most cases, recognizing a sick calf earlier, rather than later, can speed up recovery.

Calves can show signs of illness in subtle ways, which is often tricky to detect. But spending a few extra minutes watching the calves eat or interact with each other (if in group housing) can pay huge dividends when catching signs of calf ailment early such as scours, droopy ears, or fever.

According to the University of Minnesota Dairy Extension’s The “ABCDEFGs” for healthy calves article, scours and pneumonia cause the most morbidity and mortality in calves. In that article, guidelines for what it takes to raise healthy calves are discussed. Using calf raising resources, such as this article, when writing a calf health protocol can be helpful in avoiding overlooking a major component.

Here are a few of the identifications recommended by a University of Kentucky Extension article:

Eyes: should not be recessed (a sign of dehydration).

Ears: should be alert and not droopy.

Temperature: a temperature over 103°F deserves further investigation into a possible illness.

Aggressiveness: calves should be up and ready when fed milk. A calf that isn’t interested in drinking or eating is one to pay more attention to and consider feeding electrolytes.

Paying extra attention to the youngest bovines on the operation is crucial, as they may not show signs of sickness as obviously as older animals. Implementing a protocol that outlines treatments, identification of sick calves, and feeding guidelines can help keep your calf raising operation consistent and running smoothly.