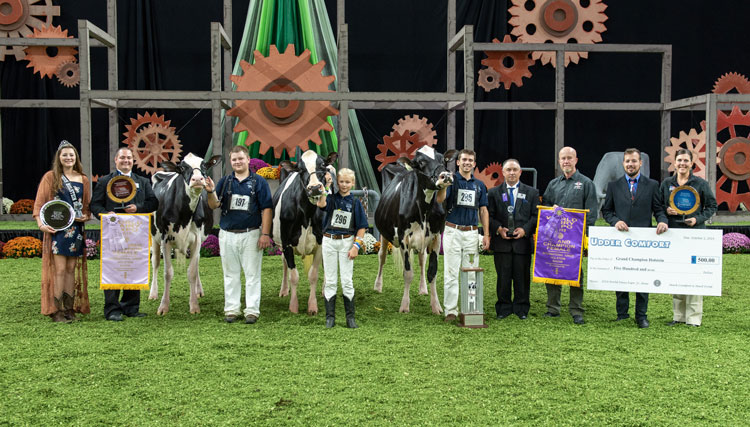 According to judge Eddie Bue of Kaukauna, Wis., “For (associate judge) Brandon (Ferry) and I, this five-year-old cow just wowed us when she entered the ring. She has so much style, so much ring presence, and just a beautiful mammary system. She walks a little bit freer on her rear feet and legs and is a little stronger on her pasterns than the aged cow.”

Right behind Jaelyn as Reserve Grand Champion and the winning Aged Cow was Lida-Acres Atwood Annie, the Reserve Senior Champion, exhibited by Olivia and Madilyn Johnson of Pelican Rapids, Minn.

The Junior Champion was exhibited by Jacob Bingham of Clear Spring, Md. His heifer, Harvue Doorman Fiji-ET, was the winner of the Spring Yearling Heifer class. Reserve Junior Champion went to the winning Winter Heifer Calf, Vandoskes Denver Cami-ET. She was exhibited by Brianne, Brooklyn, and Reid Vandoske of Cleveland, Wis. Cami also captured the title of champion bred-and-owned heifer.