Processing capacity shortage is holding back the country's No. 3 milk state

Although it became the third largest milk-producing state in the U.S. last year, Idaho is undoubtedly capable of much more. But unlocking that potential requires one very key ingredient: More processing capacity is needed to spur more competition for milk that will result in higher pay prices.

A sense of optimism that this is already happening surrounded the 67th United Dairymen of Idaho annual meeting this week in Boise. With a core of progressive large-herd producers, abundant arable land, and a small state population, the state's dairy industry is well positioned to continue its expansion. However, a shortage of processing capacity has long kept Idaho milk prices among the lowest in the nation. 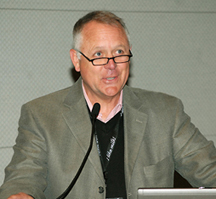 Mike Roth
More capacity is on the way. Chobani Greek Yogurt has announced it will build a $100 million state-of-the-art yogurt plant in Twin Falls, Idaho, that is scheduled to open in 2012. Initial capacity is two million pounds per day and planned eventual capacity is six million. The competition for milk and new shipping options for producers it will bring may be just a start, said UDI President Mike Roth (seen here.)
"The landscape of our industry is changing, and a new paradigm exits," he told the membership. "Abundant milk production attracts abundant processing capacity. We want Chobani, and we want more processors. But we're not waiting for more processors to call us; we're calling them. Dairymen and processors in Idaho have reached a fork in the road, and I hope we can both take the same path."
Related

I am one biased farmer
HD Notebook
Related to:
HDN, yogurt
In HD Notebook